Official results weren't expected for hours, but the exit poll of about 89,000 voters at 330 polling stations. 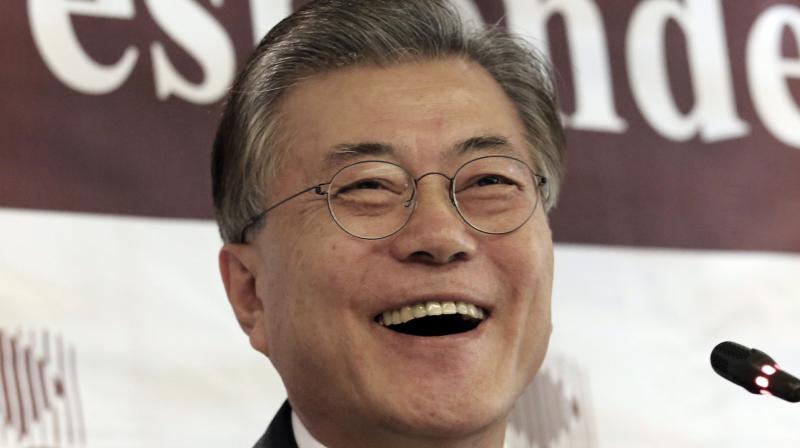 A win by Moon would end a decade of conservative rule in South Korea and could result in sharp departures from recent policy toward nuclear-armed North Korea.

Official results weren't expected for hours, but the exit poll of about 89,000 voters at 330 polling stations, jointly commissioned by three major television stations and released just after polls closed, showed Moon receiving 41.4 percent of the vote.

His two main rivals, conservative Hong Joon-pyo and centrist Ahn Cheol-soo, were expected to garner 23.3 percent and 21.8 percent, respectively, according to the exit poll, which had a margin of error of 0.8 percentage points.

Such polls are merely a snapshot of the stated intentions of certain voters. "I hope today will open the door for a new Republic of Korea," Moon told jubilant party members after the release of the exit poll. "I will achieve reforms and national unity, the two missions that our people long for."

Moon, the Democratic Party candidate, has called for engagement with North Korea, saying that the hard-line approach favored by conservative governments did nothing to prevent the North from expanding its nuclear bomb and missile programs and only reduced South Korea's voice in international efforts to deal with its rival.

The winning candidate will be officially sworn in as South Korea's new president after the election commission finishes the vote count and declares the winner Wednesday morning.

This forgoes the usual two-month transition because Tuesday's vote was a by-election to choose a successor to Park, whose term was to end in February 2018.

Following months of protests by millions and impeachment by lawmakers, Park was removed from office and arrested in March over corruption allegations. The new South Korean president will still serve out a full, single five-year term.

"I gave all my body and soul (to the election) to the very end," Moon, 64, told reporters Tuesday after casting his ballot in Seoul.

Moon was chief of staff for the last liberal president, the late Roh Moo-hyun, who sought closer ties with North Korea by setting up large-scale aid shipments to the North and by working on now-stalled joint economic projects.

Hong, an outspoken former provincial governor who pitched himself as a "strongman," described the election as a war between ideologies and questioned Moon's patriotism.

After voting, Hong said the election was a "war of regime choices between people, whether they decide to accept a North Korea-sympathizing leftist government or a government that can protect the liberty of the Republic of Korea," South Korea's formal name.

Park's trial later this month on bribery, extortion and other corruption charges could send her to jail for life if she is convicted.

Dozens of high-profile figures, including Park's longtime confidante, Choi Soon-sil, and Samsung's de facto leader, Lee Jae-yong, have been indicted along with Park.

Moon frequently appeared at anti-Park rallies and the corruption scandal boosted his push to re-establish liberal rule. He called for reforms to reduce social inequalities, excessive presidential power and corrupt ties between politicians and business leaders.

Many of those legacies dated to the dictatorship of Park's father, Park Chung-hee, whose 18-year rule was marked by both rapid economic rise and severe civil rights abuse.

As a former pro-democracy student activist, Moon was jailed for months in the 1970s while protesting against the senior Park.

Many analysts say Moon, if elected, likely won't pursue drastic rapprochement policies because North Korea's nuclear program has progressed significantly since he was in the Roh government a decade ago.

A big challenge for whoever wins will be US President Donald Trump, who has proven himself unconventional in his approach to North Korea, swinging between intense pressure and threats and offers to talk.

"South Koreans are more concerned that Trump, rather than North Korean leader Kim Jong Un, will make a rash military move, because of his outrageous tweets, threats of force and unpredictability," Duyeon Kim, a visiting fellow at the Korean Peninsula Future Forum in Seoul, wrote recently in Foreign Affairs magazine.

"It is crucial that Trump and the next South Korean president strike up instant, positive chemistry in their first meeting to help work through any bilateral differences and together deal with the North Korean challenge," she said.