Exit poll results will be available immediately after voting closes at 8 p.m. (11:00 GMT). 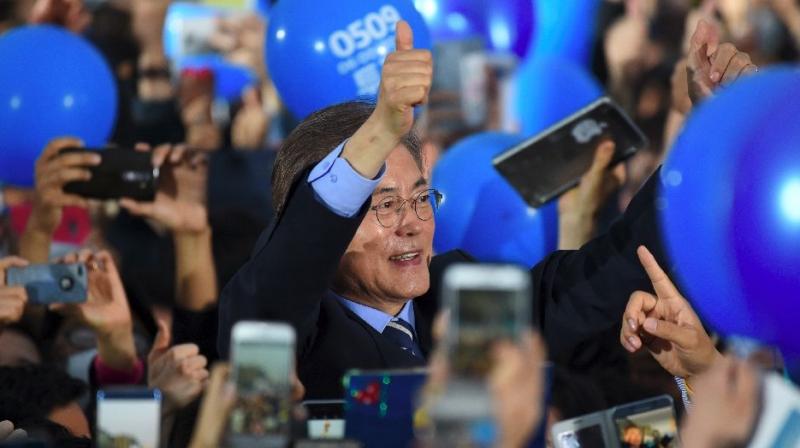 Seoul: South Koreans went to the polls Tuesday to choose a new president after Park Geun-Hye was ousted and indicted for corruption, and against a backdrop of high tensions with the nuclear-armed North.

Voters have been galvanised by anger over the sprawling bribery and abuse-of-power scandal that brought down Park, which catalysed frustrations over jobs and slowing growth.

“I feel the people’s strong will to change the government... We can make it a reality only when we vote”, Moon said after casting his ballot with his wife at a polling station in western Seoul.

Hong Joon-Pyo, of Park’s Liberty Korea party, who languished in third place in the 13-strong field on 16 percent, urged voters to support him, branding Moon as a “pro-Pyongyang leftist”.

Chung Tae-Wan, a 72-year-old doctor, cast his ballot at a polling station in the prosperous Seocho district of the capital. “I voted for Hong, as security (against North Korea) is the most important thing”, he said.

Kim Kyung-Min, 24, said she cast her ballot in advance last week. “I was so disappointed in Park and the establishment”, she told AFP, but refused to say whom she voted for.

More than 139,000 voting stations opened at 6 am local time (2100 GMT) across the country under overcast skies, with turnout expected to hit a record high.

Exit poll results will be available immediately after voting closes at 8 p.m. (11:00 GMT).

The campaign has focused largely on the economy, with North Korea less prominent, but after a decade of conservative rule a Moon victory could mean a sea change in Seoul’s approach towards both Pyongyang and key ally Washington.

The 64-year-old -- who is accused of being soft on the North by his critics -- has advocated dialogue to defuse tensions and to bring it to negotiations, and is seen to favour more independence in relations with the US, Seoul’s security guarantor with 28,500 troops in the country.

Seoul needs to “take the lead on matters in the Korean peninsula” and South Koreans should not “take the back seat”, he said in a recent media interview.

The North has carried out two nuclear tests and a series of missile launches since the start of last year in its quest to develop a missile capable of delivering a nuclear warhead to the US mainland.

Washington has said military action was an option, sending fears of conflict spiralling.

More recently US President Donald Trump has softened his message, saying he would be “honoured” to meet the North’s leader, Kim Jong-Un.

Moon has also said he would be willing to visit Pyongyang to meet Kim and advocated resumption of some of the inter-Korea projects shuttered by his predecessors, including the Kaesong joint industrial zone.

But for many South Korean voters, corruption, slowing growth, unemployment, and even air pollution from China top the list of concerns.

South Korea’s rapid growth from the 1970s to 1990s pulled a war-ravaged nation out of poverty but slowed as the economy matured, and unemployment among under-30s is now at a record 10 percent.

Frustration over widening inequality in wealth and opportunities fuelled anger over Park’s scandal, which exposed the cosy and corrupt ties between regulators and powerful family-oriented conglomerates, known as chaebols, that have endured for decades.

Moon, Ahn and other candidates have both promised to reform the chaebols, which dominate the economy and have long been criticised for operating with little scrutiny from investors or regulators.

Another issue is relations with Beijing, which imposed a series of measures seen as economic retaliation over the deployment of a US anti-missile system, THAAD, in the South.

In an editorial a day ahead of the vote, the JoongAng daily said the South’s next leader would have to steer the country “against a myriad of immediate and long-term challenges”.

“If we make the wrong judgment, we again will have to pay the price, as we have learned from our previous bad choices.”