The Yameen government refused to obey the court orders and declared a state of emergency in the country. 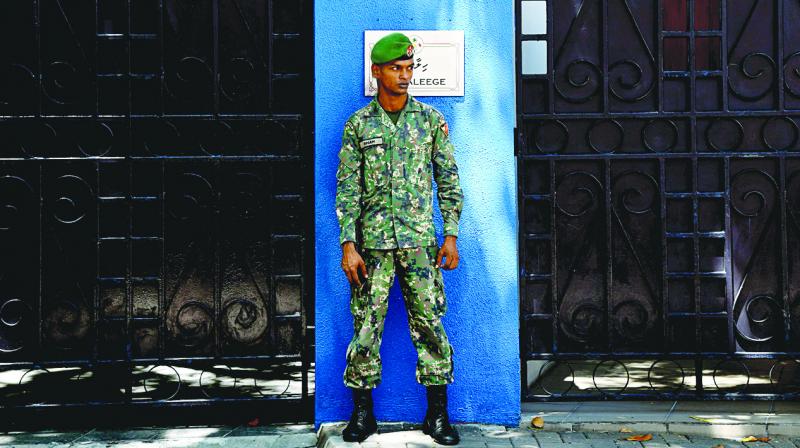 A Maldives soldier stands guard outside the President's residence in Male on on Thursday. The international community has censured Maldives President Abdulla Yameen for imposing special Emergency provisions that allow the military to detain suspects for long periods without charge. — AFP The UN has urged Yameen to lift the state of emergency, and will discuss the crisis gripping the Indian Ocean archipelago in a closed-door meeting at the Security Council on February 8. (Photo: AFP)

Male: Embattled Maldivian President Abdulla Yameen has blamed ‘a few’ people for bringing chaos to the country as the police accused two top judges of accepting millions of dollars in “bribes” to facilitate a coup against the government.

The island nation, which has seen several political crises since the ouster of its first democratically-elected President Mohamed Nasheed in 2012, plunged into chaos last Thursday when the apex court ordered the release of nine imprisoned Opposition politicians, maintaining that their trials were “politically motivated and flawed”.

The Yameen government refused to obey the court orders and declared a state of emergency in the country.

Acting police chief Abdulla Nawaz told reporters that police had found evidence that “millions of dollars were given to Saeed and Hameed, and to court official Hassan Saeed, as bribes” in return for ordering the release of imprisoned politicians opposed to President.

All are being charged with attempting to unlawfully overthrow the government, the police said.

Mr Saeed’s lawyer claimed that his client received death threats before his arrest.

Mr Saeed was warned that he would be “cut into pieces” if he did not overturn the court order releasing political dissidents, the lawyer said.

Mr Yameen said that the day some three to four people brought the state to its knees should not be forgotten.

He defended his action of imposing an emergency, saying the Maldives was saved from the actions of fellow citizens of the Maldives.