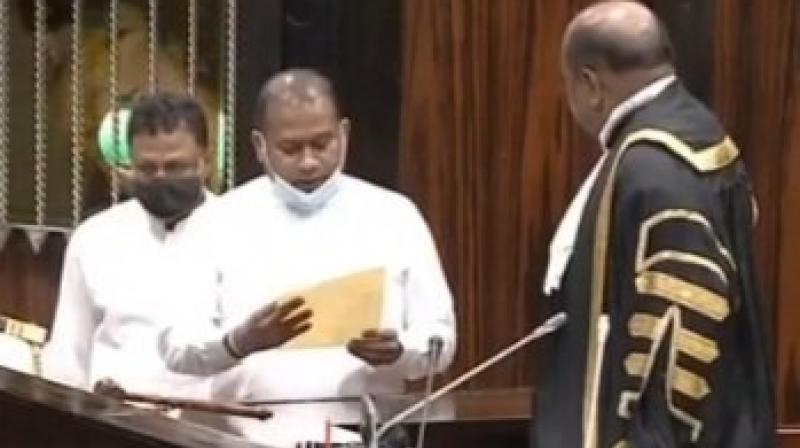 Colombo: A Sri Lankan lawmaker from the ruling party, who was elected to Parliament while serving a death sentence in a murder case, was on Tuesday sworn in as an MP by the speaker.

Sri Lanka People's Party (SLPP) lawmaker Premalal Jayasekera was convicted in a murder case on July 31, just days ahead of the August 5 parliamentary elections which he contested from the south western Ratnapura region.

He was sworn in as a member of parliament by speaker Mahinda Yapa Abeywardena.

His oath taking followed the court of appeal issuing an interim order directing the Commissioner-General of Prisons to make arrangements for Jayasekara to attend Parliament.

Jayasekara had filed a writ petition before the Court of Appeal asking for a relief. Theappeal court order had come after the Attorney-General Dappula de Livera's ruling last week that Jayasekara is unsuitable to either sit in parliament or vote in the house.

The Attorney General had said that as per section 91 (1) (a) of the Constitution of Sri Lanka, no person shall be qualified to be elected as a Member of Parliament or to sit and vote in Parliament if he is or becomes subject to any of the disqualifications specified in Article 89.

It adds, Section 89 (d) of the Constitution of Sri Lanka notes that no person shall be qualified to be an elector at an election of the President, or of the Members of Parliament or to vote at any Referendum if he is under sentence of death and he will lose his right to vote under such a sentence.

Jayasekera and two others were sentenced to death by the Ratnapura High Court for the 2015 murder of a political activist in the run up to the January 2015 presidential election.

Jayasekera was not able to attend the parliament's inaugural session on August 20 after the SLPP's landslide win.