Reporters Without Borders called on the authorities to do everything possible to quickly find and punish her killers. 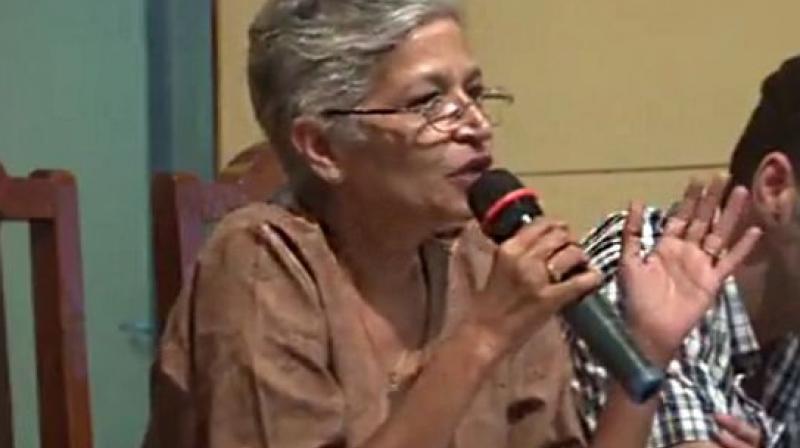 The murder of Gauri Lankesh has sparked outrage throughout the country.

Washington: The killing of activist- journalist Gauri Lankesh was a "tragic murder", the US has said, days after the slain scribe who was regarded as a symbol of free speech and dissent was shot dead outside her home.

Lankesh, 55, known for her left-leaning outlook and forthright views on Hindutva politics, was shot dead by unidentified assailants in Bangalore on Tuesday, triggering nationwide condemnation.

Addressing a Congressional subcommittee during a hearing on South Asia, US Acting Assistant Secretary of State for South and Central Asian Affairs Alice Wells said India provides the "highest constitutional protections" for religious minorities, and the goal of the US is to work with India to encourage it to meet the goals set in its constitution and laws.

"There are cases, obviously, of religious -- as we detail in both the Human Rights Report and the International Religious Freedom Report -- of infringements, and there was a tragic murder of a journalist just this week who was often the subject of nationalist criticism," she said, in a reference to the killing of Lankesh.

She said these are the challenges for any democracy, but India is a democracy, and it is a "vibrant democracy".

"And we have respect for Indian institutions and ability to raise and meet these challenges. And we certainly, in all of our engagements, at senior levels, encourage the Indian government to do so," Wells said in response to a question from Congressman Ted Yoho, Chairman of the House Foreign Affairs Subcommittee on Asia and the Pacific.

In a statement, Reporters Without Borders (RSF) said it "is deeply shocked" by leading Indian journalist and media freedom defender Lankesh’s murder in Bangalore.

It called on the authorities to do everything possible to quickly find and punish her killers.

"We firmly condemn this terrible murder, which has deprived the media of a tough and determined champion and has deprived India of a voice that was fundamental for the country’s democratic life," said Daniel Bastard, the head of RSF’s Asia-Pacific desk.

The Indian National Overseas Congress in the US said Lankesh’s death appears to be a "meticulously planned" and executed to silence a powerful voice.

"The opposing forces could not match her rationale pointing up the dangers of right-wing politics and its possibly disastrous effect on the secular fabric of the nation. Her harsh criticism of prevailing casteism in the society was often directed at institutions that still harbour those sentiments and made her more of a passionate activist who had little patience for the status-quo," George Abraham of INOC-USA said in a statement.

"Any attack on the media is an attack on the fundamental right to freedom of expression of each member of society. I urge the Indian authorities to ensure that the perpetrators are brought to justice and this crime is punished," Bokova said.