Trump raised alarms in Pakistan when he raised the prospect of recruiting archrival India into the US strategy in Afghanistan. 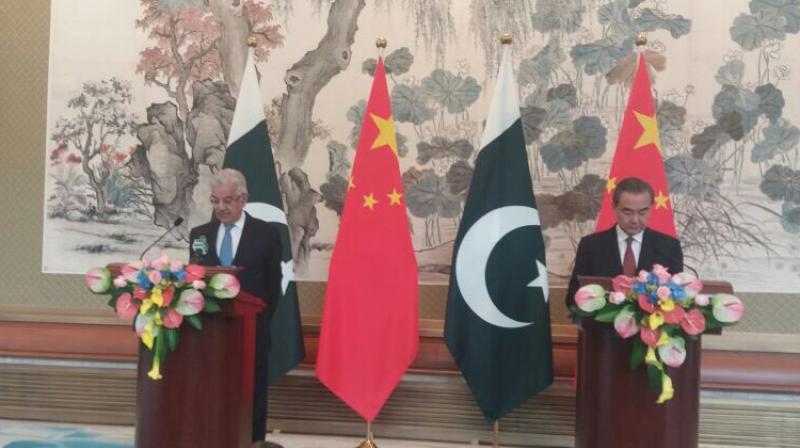 Beijing: The top diplomats from China and Pakistan took swipes at President Donald Trump's newly unveiled Afghanistan policy on Friday as they called for new talks with the Taliban to resolve the 16-year conflict.

Chinese Foreign Minister Wang Yi said Beijing stood firmly behind its "ironclad friend" Pakistan, even though "some countries" did not give Islamabad the credit it deserved in fighting terrorism, a pointed reference to the US

Pakistani Foreign Minister Khawaja Asif's first trip abroad to Beijing this week appeared to highlight how ties between the two all-weather allies have grown even closer while Pakistan's critical relationship with the US is disintegrating amid mutual recriminations and distrust.

Wang and Asif announced that China, Pakistan and Afghanistan will hold a new series of three-way talks later this year in China to push forward settlement negotiations with the Taliban while the US doubles down on its military campaign.

Trump infuriated Pakistan last month when he accused Islamabad of providing extremists safe haven and threatened to withhold military aid. He further raised alarms in Pakistan when he raised the prospect of recruiting archrival India into the US strategy in Afghanistan.

US officials said this week that $225 million in military aid for Pakistan have been suspended while about 3,500 additional troops will head to Afghanistan to reverse the Taliban's battleground advances and gain leverage in negotiations.

"It's our firm view that there is no military solution in Afghanistan, the focus should be on a politically negotiated settlement," Asif told reporters in Beijing. "China is playing a very constructive role in this regard."

Pakistan has repeatedly rejected US accusations that it is abetting groups like the Taliban-linked Haqqani Network, a position that China has backed.

"The government and people of Pakistan have made huge sacrifices in the fight against terror for everyone to see and the international community should recognize that," Wang said.

The two ministers presented a closely unified front just days after China handed Pakistan an unexpected diplomatic setback at the BRICS economic summit in Xiamen. On Monday, China joined several nations to declare the Pakistan-based militant groups Lashkar-e-Taiba and Jaish-e-Mohammad as terrorist organizations, in a move that was praised by India and the US

Asif did not address the terror designation on Friday but was quoted by Pakistani media before arriving in Beijing as saiding that it should not jeopardize bilateral ties. Rather, Pakistan should put its "house in order," he said.