Not in favour of war, resolve border standoff with talks: Nepal to India, China

Nepal will face dire consequences in case a war between India and China breaks out, halting the trade and supplies from India. 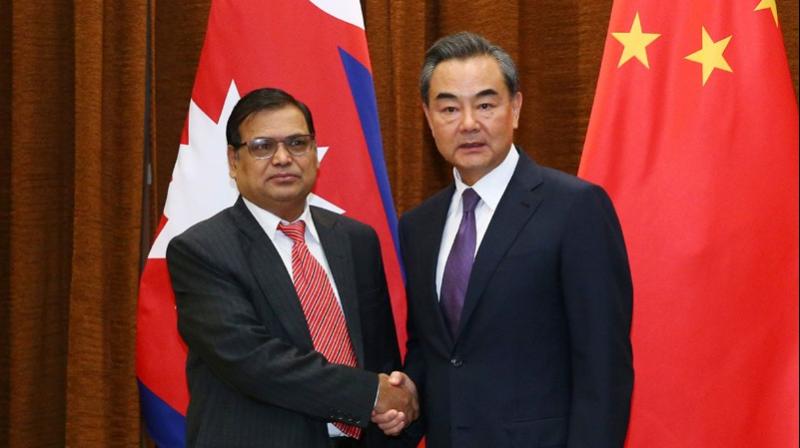 Nepal's Deputy Prime Minister as well as Minister for Foreign Affairs Krishna Bahadur Mahara (L) on Monday called for a peaceful resolution between India and China over the border standoff. (Photo: AFP)

Kathmandu: Nepal has asked India and China to show restraint over the continuing border standoff between the two sides and called for a peaceful diplomatic dialogue to solve the issue.

Nepal's Deputy Prime Minister as well as Minister for Foreign Affairs Krishna Bahadur Mahara on Monday called for a peaceful resolution between India and China over the border standoff.

"Nepal has a clear policy. The dispute which is being seen in the border side in Doklam, we wish for peaceful, diplomatic and dialogue to resolve the issue. This is Nepal's policy, this is Nepali perspective. Nepal is not in favour of war and never expects a solution from the war," Mahara said during a press briefing.

Nepal will face dire consequences in case a war between India and China breaks out, halting the trade and supplies from India with whom Nepal shares an open border and commonality.

The trade between Nepal and China is not frequent in comparison with India as there has always been a problem with the transportation from the Northern side.

"We are preparing for the Prime Minister's visit to India. The most potential date for his visit to India would be from 23rd to 27th August," Mahara said.

Prime Minister Deuba's five-day visit to India is expected to focus on implementing the previous agreements and engagement with the senior Indian politicos.

Indian and Chinese troops continue to be locked in a standoff in Doklam and both sides have moved additional troops, ammunition and military equipment to the area.

The stand-off emerged after the Chinese troops were stopped by the Indian Army from constructing roads along the Doklam border.

India claims Sikkim border as part of its territory, while China has said that the area falls on their side as per the 1890 treaty signed between British and China.

Consequently, China suspended the annual Kailash Manasarovar Yatra and conceded that the decision to suspend the pilgrimage was due to the border scuffle.

It also alleged that the Indian troops had crossed the Sikkim sector of the Indo-China border. Beijing has accused New Delhi of violating a convention signed in 1890 between Britain and China relating to Sikkim and Tibet.