Media reports said that the rescuers brought the remaining 37 miners to safety and rushed them to a hospital. 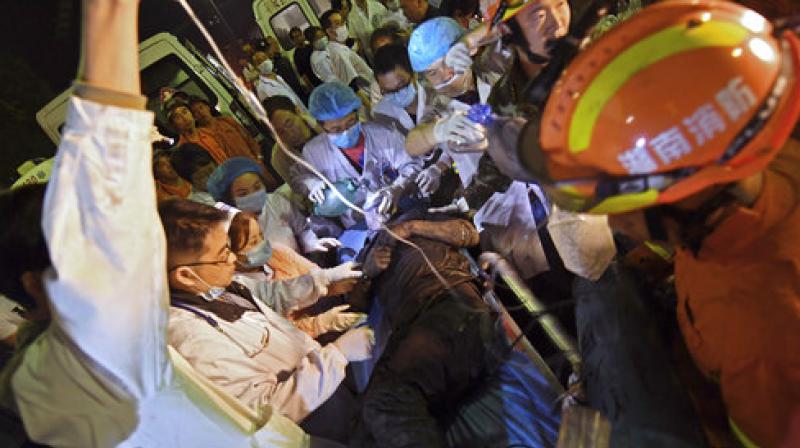 China, which is the world's largest coal producer, maintains the highest fatality rates due of lax safety precautions. (Photo: AP)

Beijing: Eighteen workers have been killed after a gas leak in a coal mine in central China's Hunan Province, officials said today, the latest in a slew of mining accidents that continue to plague the coal-rich country.

As many as 55 people were working in the mining shaft when a gas leak took place at the Jilinqiao colliery in Huangfengqiao Township, Youxian County on Sunday.

The rescuers brought the remaining 37 miners to safety and rushed them to hospital, state-run Xinhua news agency reported.

Investigators are still testing substances in the poisonous gas. Police have detained those responsible for accident pending investigation.

China, which is the world's largest coal producer, maintains the highest fatality rates due of lax safety precautions.

China has witnessed many deadly mine accidents, claiming hundreds of lives annually even as the country has tried to improve standards by shutting older and smaller mines.

In March, 17 coal miners were killed when a lift used to move workers fell down a shaft in northeastern Heilongjiang province.

Thirty-three people died in a gas explosion at a coal mine in the southwestern city of Chongqing in October last year.

At least 38 people died in two separate coal mine disasters in China in December. China has acknowledged an increase in deaths from major coal mine accidents as the government presses its campaign to cut production overcapacity in the industry.

In July, a top safety official told local media that a total of 23,534 production accidents claimed 14,136 lives. Across all industries tracked by State Administration of Work Safety (SAWS), 198 deaths occurred in 15 major accidents.