Modi, in his joint press statement with Suu Kyi after the talks, said India understands the problems being faced by Myanmar. 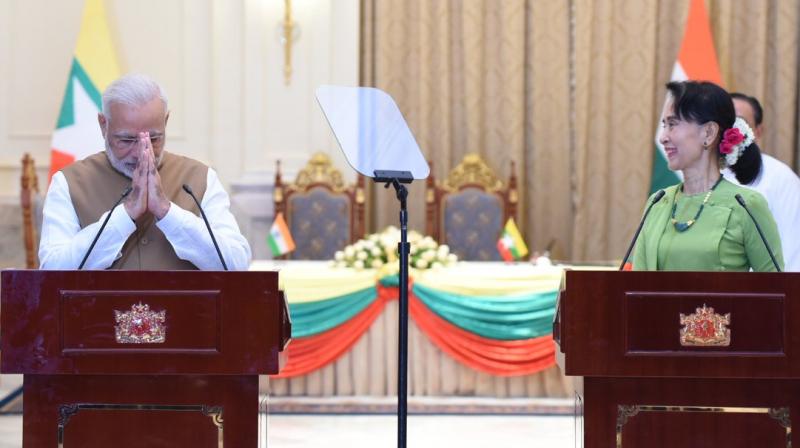 Nay Pyi Taw: India said on Wednesday that it shares Myanmar's concerns over the "extremist violence" in the Rakhine state and urged all stakeholders to find a solution that respects the country's unity, as Prime Minister Narendra Modi held talks with State Counsellor Aung San Suu Kyi.

The two leaders also vowed to combat terror and boost security cooperation with Modi emphasising that it was important to maintain stability along the long land and maritime borders of the two countries.

Modi's first bilateral visit here comes at a time when the Myanmarese government led by Nobel laureate Suu Kyi is facing international pressure over the 125,000 Rohingya refugees who have poured across the Bangladeshi border in just two weeks after Myanmar's military launched a crackdown in the Rakhine state.

Modi, in his joint press statement with Suu Kyi after the talks, said India understands the problems being faced by Myanmar.

He said India shares Myanmar's concerns over the "extremist violence" in the Rakhine state, especially the loss of innocent lives of people and the military.

"We hope that all stakeholders can work together towards finding a solution which respects the unity and territorial integrity of Myanmar," Modi said. At the same time, the solution can bring about peace, justice, dignity and democratic values for all, he added.

Taking a strong stance on terror, Suu Kyi said, "Together we will ensure that terror is not allowed to take root on our soil or on the soil of neighbouring countries."

After Modi-Suu Kyi talks, 11 agreements were signed between the two sides in areas like maritime security, strengthening democratic institutions in Myanmar, health and information technology.

Modi also asserted that India stands by Myanmar amid the challenges the country is facing.

He said that India has decided to grant free visa to Myanmarese citizens who wish to visit the country.

"We would like to contribute to Myanmar's development efforts as part of our 'Sabka saath sabka vikaas' initiative," Modi said.

The meeting between Modi and Suu Kyi came on a day she was quoted telling Turkish President Recep Tayyip Erdogan that global outrage over Myanmar's treatment of its Rohingya Muslims was being fuelled by "a huge iceberg of misinformation".

Sympathy for the Rohingya was being generated by "a huge iceberg of misinformation calculated to create a lot of problems between different communities and with the aim of promoting the interest of the terrorists", Suu Kyi was quoted by an official statement as telling Erdogan in a call.

Suu Kyi has come under fire in recent days for failing to speak out against violence targeting Rohingyas, particularly given her previous image as a champion of human rights.

UN Secretary-General Antonio Guterres has also called for the Muslims of Rakhine state to be given either nationality or legal status, and voiced concern about violence that has since late August forced nearly 125,000 people to flee and risk destabilising the region.

Modi arrived here on the second leg of his two-nation trip after he travelled to the southeastern Chinese city Xiamen where he attended the annual BRICS Summit.

They had discussed steps to deepen the "historical relationship" between the two neighbours.

This is Modi's first bilateral visit to Myanmar. He had visited the country in 2014 to attend the ASEAN-India Summit.

Myanmar is one of India's strategic neighbours and shares a 1,640-km-long border with a number of northeastern states including militancy-hit Nagaland and Manipur.