The IHC recommended that the legal standing of the agreement should be discussed in a joint session of parliament. 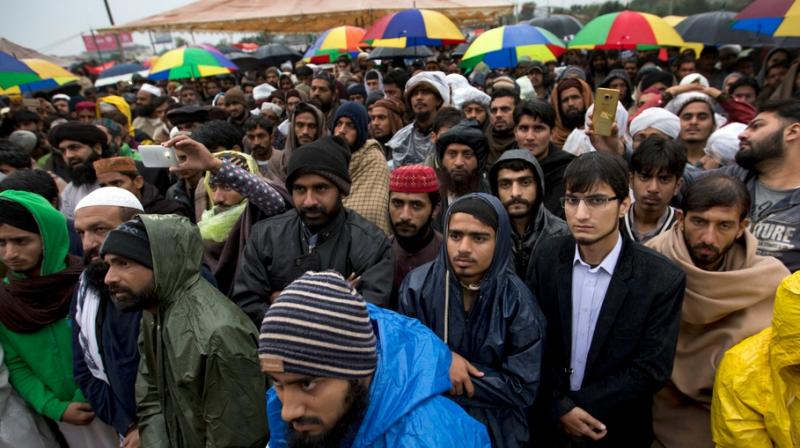 Pakistan's law minister Zahid Hamid was accused by the protesters of blasphemy after a reference to the Prophet Muhammad was left out of a revised version of the electoral oath. He called it a clerical error. (Photo: AFP)

Islamabad: Pakistan's high court Monday questioned the legal standing of the agreement reached between the government and Islamist protest leaders, saying that none of the terms could be legally justified.

After the weeks-long protest that had virtually paralysed the capital, the government and leaders of the TLY reached an agreement on November 26 in which the former conceded to the latter's demands including dropping all the cases against the protesters.

"How can cases filed under the Terrorism Act be dismissed?" Justice Shaukat Aziz Siddiqui asked during the hearing regarding the recent sit-in at the Faizabad Interchange in the capital, Dawn News reported.

The Islamabad High Court (IHC), however, had noted a "number of serious objections on the terms of agreement" and expressed its displeasure over the army's role in the settlement made with the protesters.

"Who is the army to adopt a mediator's role?" Justice Siddiqui had inquired in the previous hearing. "Where does the law assign this role to a major general?"

The IHC recommended that the legal standing of the agreement should be discussed in a joint session of parliament.

Attorney General of Pakistan (AGP) Ashtar Ausaf, however, disagreed with the recommendation, saying that since the high court had taken suo motu notice of the matter, the judiciary should oversee it. He had appeared in court on Justice Siddiqui's orders, the report said.

The AGP requested the court to grant him some time to determine the legal position of the army's role as an arbitrator in the negotiations, saying that he was not in the country and needed time to prepare the report.

In a written order on November 27, the IHC bench had directed the attorney general to help the court determine how the armed forces could act as an arbitrator.

The Intelligence Bureau also presented a report on the botched operation against the protesters by the police while the chief commissioner of Islamabad submitted a detailed report on the protest.

The judge remarked that the protesters were guilty of blasphemy, pointing to the language used by the protest leaders and participants during the sit-in.

Pakistan's law minister Zahid Hamid was accused by the protesters of blasphemy after a reference to the Prophet Muhammad was left out of a revised version of the electoral oath. He called it a clerical error.

Hamid's resignation cleared the main hurdle in the lifting of siege of the capital by protesters.