Ahead of Eid, Pakistan launches its first ever moon-sighting website 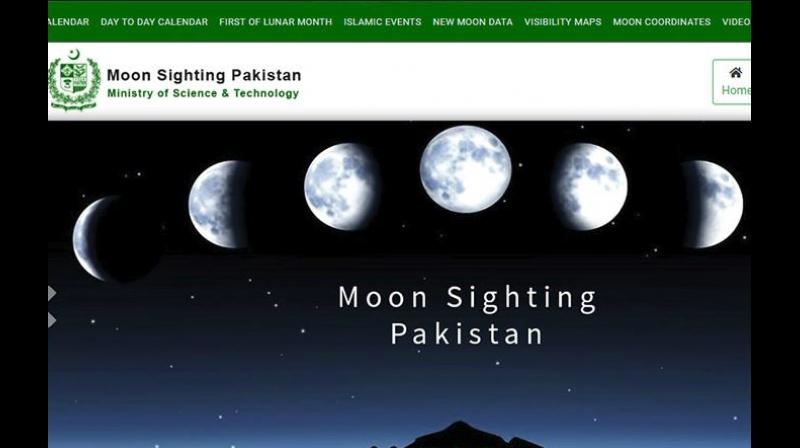 The website 'pakmoonsighting .pk' was inaugurated on Sunday, two weeks after Federal Minister for Science and Technology Fawad Chaudhry made an announcement regarding the preparation of a scientific lunar calendar. (Photo: Screenshot)

Islamabad: Pakistan has launched its first ever moon-sighting website in a bid to end decades-old controversy over the start of key lunar months that decides the beginning of the holy month of Ramzan and Eid festivals.

The website "pakmoonsighting .pk" was inaugurated on Sunday, two weeks after Federal Minister for Science and Technology Fawad Chaudhry made an announcement regarding the preparation of a scientific lunar calendar.

He said the website would show the exact dates of important Islamic occasions -- Ramzan, Eidul Fitr, Eidul Azha and Muharram, the Dawn reported.

Speaking at the launch of the website, Chaudhry said that it will end the "moon-sighting controversy" in the country.

He said that not only Pakistan but also other countries can benefit from it to decide the sighting of moon.

The website features sections such as Islamic calendar for the next five years, a day-to-day lunar calendar against dates from the Gregorian calendar, and the dates on which the first day of every lunar month will fall.

Everyone can access year-wise data about the new moon, its monthly visibility maps and monthly coordinates in major cities on the site as well. "A mobile phone app was also being prepared to make it further easier to know when the lunar month would begin," Chaudhry said.

Pakistan has been facing controversies on key religious occasions like start of Ramzan and Eid as religious leader from different regions differ on sighting of the moon.

This year, Ramzan started in Khyber-Pakhtunhwa on May 6 while in rest of the country it began on May 7. It is also possible the celebration of Eid will be held on two different dates.

Chaudhry said such issues have been resolved and the coming Eid will be on June 5.

But his efforts to resolve the dispute may not end as most of the clerics insist that sighting of moon with naked eye is essential.