In video that has surfaced on social media, cleric was seen stressing that Pak had been formed to not allow any Sikh to enter the country. 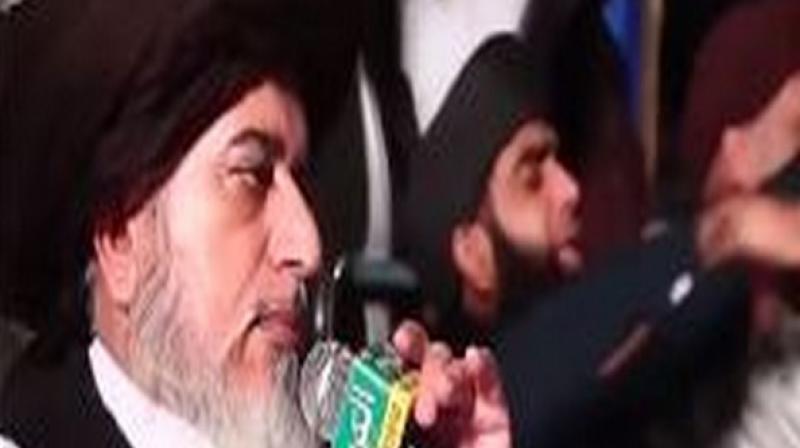 Khadim Rizvi is the founder of Tehreek-e-Labbaik Pakistan, a religious-political organisation founded in 2015 known for its protests against any change to Pakistan's blasphemy law. Some of their protests have been on a large scale. (Photo: ANI)

Islamabad: Despite inaugurating the Kartarpur corridor on a noble note to allow Sikh pilgrims to visit Gurdwara Darbar Sahib, Prime Minister Imran Khan has not been able to curb the religious fanaticism and barbarism that exists on his land in the so-called name of Islam.

In a video that has surfaced on social media an Islamic cleric was seen stressing that Pakistan had been formed to not allow any Sikh to enter the country.

"Pakistan is formed from the word 'Pak' or pious in Islam. The dirty habits of Sikhs will not be allowed here," Islamist scholar Khadim Hussain Rizvi was heard in the video talking about facilities availed by Sikh pilgrims visiting the Kartarpur Gurdwara.

Khadim Rizvi is the founder of Tehreek-e-Labbaik Pakistan, a religious-political organisation founded in 2015 known for its protests against any change to Pakistan's blasphemy law. Some of their protests have been on a large scale.

"Only Mecca and the Prophet are considered to be holy in our land. The Sikhs can visit Amritsar for pilgrimage if they want, but they should not come here," the cleric added.

Experts at a talk show on Canadian Tag TV emphasised that the video is another confirmation that PM Imran Khan had attempted to buy the Sikh sentiment to use it against the BJP-led government in India and also fuel the separatist movement of Khalistan.

The much-awaited Kartarpur Sahib Corridor, a 4.7-kilometre-long passage that connects Dera Baba Nanak Sahib in India's Gurdaspur and Gurdwara Darbar Sahib in Pakistan's Kartarpur was formally opened for pilgrims on Saturday three days ahead of 550th anniversary of the founder of Sikhism Guru Nanak Dev on November 12.

A state-of-the-art Passenger Terminal Building, a fully air-conditioned building akin to an airport has also been built to facilitate nearly 5000 pilgrims each day along with necessary public amenities like kiosks, washrooms, childcare, first aid medical facilities, prayer room and snacks counters inside the main building. Robust security infrastructure is put in place with CCTV surveillance and public address systems.