29 killed in suicide bomb attack at Shiite mosque in Afghanistan

Residents were furious the police did not prevent the second explosion, although it is still not clear what caused it. 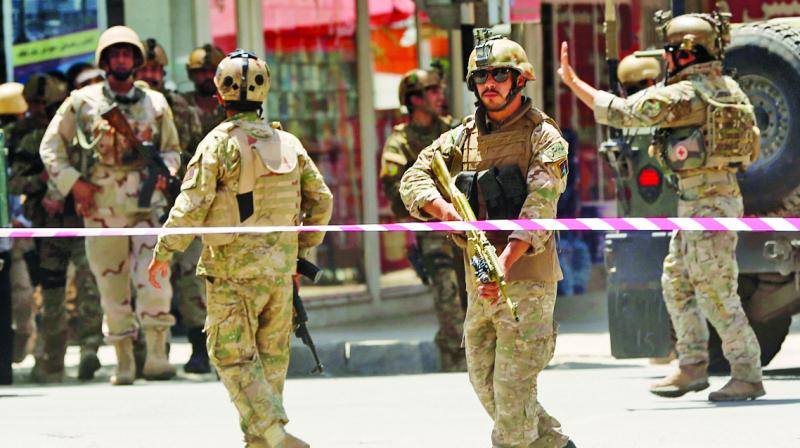 Security forces at the site of a suicide attack in Kabul (Photo: AP)

However Mehdi Hadid, a lawmaker from Herat, who went to the site soon after the explosion told The Associated Press that the scene was one of horrific carnage. He estimated at least 100 dead and wounded were scattered throughout the mosque. The attack took place in the middle of evening prayers when the mosque was packed with about 300 worshippers.

Hadid said he saw several pieces of a body that was being identified as the assailant. Although it's not clear if there was a second attacker, witnesses in the area reported hearing a second explosion about 10 minutes after the initial bomber detonated his explosives.

Located just 50 meters (150 feet) away was an Afghan National Police station, but Hadid said the police were too frightened to take action and stood outside the mosque while the attack happened.

Residents were furious the police did not prevent the second explosion, although it is still not clear what caused it.

Dozens of local residents, who are mostly Shiites, attacked the police station pelting it with stones and setting it on fire, said Farhad.

Shiites are a minority in Afghanistan and have been threatened by the affiliate of the Islamic State group that operates in the country's east. Herat borders Iran whose capital Tehran was attacked by the so-called Islamic State in June. Herat has previously been the scene of several smaller attacks on Shiites.

No one immediately claimed responsibility for Tuesday's attack on Herat's Jawadia Mosque. However, after its attack on Monday on the Iraq Embassy in the Afghan capital Kabul IS warned Shiites in Afghanistan that they are targets.

Hadid said he rushed to the mosque after hearing about the explosion. He was told the attacker first fired on the private guards outside the mosque before entering. When inside, he fired on the praying worshippers until his rifle jammed then he blew himself up.