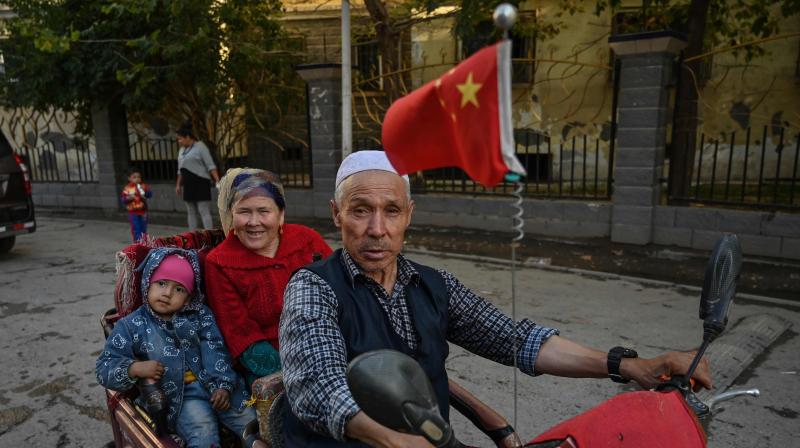 A man driving a vehicle in an ethnic Uighur neighbourhood in Aksu in the region of Xinjiang. (AFP)

Politicians around the world have called for a United Nations probe into a Chinese government birth control campaign targeting largely Muslim minorities in the far western region of Xinjiang, even as Beijing said it treats all ethnicities equally under the law.

They were referring to an Associated Press investigation published this week that found the Chinese government is taking draconian measures to slash birth rates among Uighurs and other minorities, while encouraging some of the country’s Han majority to have more children. The Inter-Parliamentary Alliance on China, a group of European, Australian, North American, and Japanese politicians from across the political spectrum, demanded an independent U.N. investigation.

“The world cannot remain silent in the face of unfolding atrocities,” the group said in a statement.

The AP found that the Chinese government regularly subjects minority women in Xinjiang to pregnancy checks and forces intrauterine devices, sterilization and even abortion on hundreds of thousands. New research obtained by The Associated Press in advance of publication by China scholar Adrian Zenz also showed that the hundreds of millions of dollars the government pours into birth control has transformed Xinjiang from one of China’s fastest-growing regions to among its slowest in just a few years.

The AP found that the population control measures are backed by mass detention both as a threat and as a punishment for failure to comply. Having too many children is a major reason people are sent to detention camps, documents and interviews show, with the parents of three or more ripped away from their families unless they can pay huge fines.

The U.S. Commission on International Religious Freedom called for a U.N. and State Department investigation, saying the Chinese government’s birth control campaign “might meet the legal criteria for genocide.” According to a U.N. convention, “imposing measures intended to prevent births” with “intent to destroy, in whole or in part, a national, ethnical, racial or religious group” is considered evidence of genocide. The last colonial governor of Hong Kong, Chris Patten, told Bloomberg Television that the birth control campaign was “arguably something that comes within the terms of the UN views on sorts of genocide.”

The U.S. Senate Foreign Relations Committee called the forced birth control “beyond deplorable,” and said that “a nation that treats its own people this way should never be considered a great power.” U.S. senators Kirsten Gillibrand and Kamala Harris wrote a letter urging the Trump administration to respond to an “alarming” AP investigation, and U.S. Senator Marco Rubio and Representative Ro Khanna also called for action.

U.S. President Donald Trump told China President Xi Jinping he was right to build detention camps to house hundreds of thousands of ethnic minorities, according to a new book by former national security adviser John Bolton. However, Secretary of State Mike Pompeo said the reports of forced birth control for minorities were “shocking” and “disturbing” in a statement Monday.

“We call on the Chinese Communist Party to immediately end these horrific practices,” he said.

Chinese foreign ministry spokesman Zhao Lijian fired back on Tuesday by calling Pompeo “a brazen liar,” saying the Uighur population had more than doubled since 1978 in response to criticism of Xinjiang’s birth control policies.

“If Mr. Pompeo is telling the truth, how can he explain the big increase in the Uighur population?” Zhao asked.

For decades, Xinjiang’s population grew quickly, as minorities enjoyed laxer birth control restrictions than Han Chinese. But in just three years, new measures have caused the birth rate in Xinjiang’s Uighur-majority areas to plunge, and it is now well under the national average.

Zhao also said the American government had been responsible for “genocide, racial segregation and assimilation policies” on Native Americans. on them.” University of Colorado researcher Darren Byler said the Chinese state-orchestrated assault on Xinjiang’s minorities does echo past birth control programs.

“It recalls the American eugenics movement which targeted Native and African Americans up until the 1970s,” he said. “China’s public health authorities are conducting a mass experiment in targeted genetic engineering on Turkic Muslim populations.”

In response to the AP story, which he called “fake news,” Zhao said the government treats all ethnicities equally and protects their legal rights. Chinese officials have said in the past that the new measures are merely meant to be fair, with the law now allowing minorities and China’s Han majority the same number of children.

However, the AP’s reporting found that while equal on paper, in practice Han Chinese are largely spared the abortions, sterilizations, IUD insertions and detentions for having too many children that are forced on Xinjiang’s other ethnicities, interviews and data show. Some rural minorities are punished even for having the three children allowed by the law.

British members of Parliament debated Xinjiang in the House of Commons on Monday, with both Labor and Conservative politicians urging the U.K. Foreign Ministry to adopt a stronger stance against the Chinese government. Nigel Adams, the British Minister of State for Asia, said the reports added to the U.K.’s “concern about the human rights situation in Xinjiang” and that it will be “considering this report very carefully.” Australian Foreign Minister Marise Payne also told Australian broadcaster SBS that the reports “further compounded” their concerns.