Bangladesh Navy yet to find 81 people after cyclone Mora; 63 rescued

Authorities in Cox's Bazar and Chittagong evacuated 350,000 people from low-lying areas before the storm blew in from the Bay of Bengal. 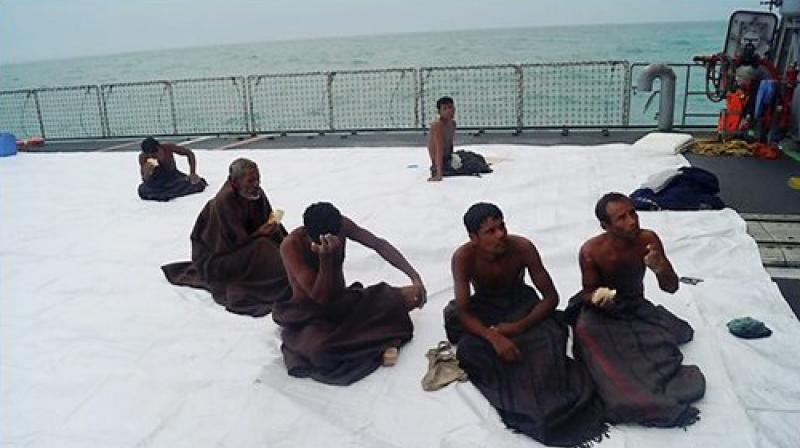 Bangladeshi nationals, who were found adrift at sea over 100 miles away from Bangladeshi city of Chittagong due to Cyclone Mora, were rescued by the Indian Navy on Wednesday. (Photo: PTI)

Dhaka:  Bangladesh's navy was searching for 81 fishermen still missing on Thursday after more than 63 were rescued from the Bay of Bengal following a devastating cyclone which killed several people and left thousands homeless.

Cyclone Mora, with wind up to 135 kph (85 mph) and heavy rain, hit southeast Bangladesh around Cox's Bazaar and the border with neighbouring Myanmar on Tuesday, leaving thousands of Muslim Rohingya refugees hunkered down in ruined camps.

The Rohingyas have fled from their homes in northwest Myanmar to escape communal violence and Myanmar army crackdown.

The Bangladeshi government has estimated that in all, there are about 350,000 Rohingyas in Bangladesh following a new influx in October 2016, when the Myanmar army launched an offensive in response to insurgent attacks.

Authorities in Cox's Bazar and neighbouring Chittagong district evacuated 350,000 people from low-lying areas before the storm roared in from the Bay of Bengal on Tuesday.

"Though the fishermen were rescued, most of the boats, the main instrument for our survival are totally damaged and it is not possible to get them replaced quickly as we are not solvent," Ahmed said over the phone from Cox's Bazar.

"Still we are grateful to the government as now the air force with helicopters is searching the remaining missing fishermen."