Saeed was also put under house arrest after Mumbai terror attacks in November 2008 but he was freed by court in 2009. 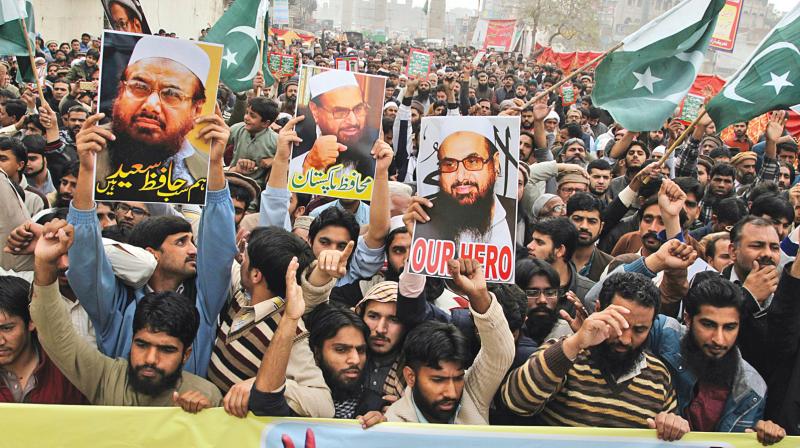 Supporters of Hafiz Saeed, head of the Lashkar-e-Tayyaba and its front organisation Jamaat-ud-Dawa, protest in Lahore recently after the Pakistani authorities took him into custody after rising international pressure. (Photo: AP)

Lahore, Mar 1 (PTI) India has asked Pakistan tore-investigate the 2008 Mumbai terror attack case and put on trial Jammat-ud-Dawah chief Hafiz Saeed who is currently under house arrest in Lahore under the anti-terrorism law.

India has made a fresh demand in a reply to Pakistan's request to send 24 Indian witnesses to record their statements in the case, an interior ministry official told PTI today.

"We have received a reply from Indian government in response to our letter regarding sending 24 Indian witnesses to Pakistan to record their statements in the Mumbai terror attack case.

"But instead of entertaining our request India has sought re-investigation of the case and also demanded trial of Jammat-ud-Dawah chief Hafiz Saeed and Lashkar-e-Taiba operation commander Zakiur Rehman Lakhvi in the light of evidence it had provided to Pakistan," the official said.

The Pakistan government on January 30 had put Saeed and the four leaders of JuD and Falah-e-Insaniat under house arrest in Lahore under the country's anti-terrorism act.

Saeed, who carries a reward of USD 10 million, was also put under house arrest after Mumbai terror attacks in November 2008 but he was freed by court in 2009.

The official said Indian witnesses statement are needed to conclude the case which has been pending for the last seven years.

He said Pakistan has no issue to try any suspect of Mumbai case provided it has evidence against him.

"If India provides some strong evidence against Hafiz Saeed in Mumbai case we will try him," he said, adding that Lakhvi was too released on bail because of lack of solid evidence against him.

India has been urging Pakistan to complete the trial at the earliest. It has said that enough evidence has been shared with Pakistan to prosecute the accused.

Meanwhile, no hearing in the Mumbai case was held today.

This was 17th consecutive hearing of the case in which no progress has been made primarily because the anti-terrorism court was awaiting reply from India regarding sending of 24 Indian witnesses to record their statements.

The trial court has already completed recording of the statements of all witnesses here and their cross examination and other relevant record has also been presented before it.

The trial court is likely to be informed about the Indian reply on next hearing scheduled for March 8.

Lakhvi got his freedom some 22 months ago after he secured bail in the case. He has been living in undisclosed location since then.

The other six suspects are in Adiala Jail, Rawalpindi.

Ten LeT militants killed 166 people and wounded dozens in Mumbai in November, 2008. Nine of the attackers were killed by police while lone survivor Ajmal Kasab was caught.

Kasab was executed after a court found him guilty and handed down death sentence.