Pell, who was charged on Thursday with historical sex abuse, strongly denies the allegations, details of which were not given by police. 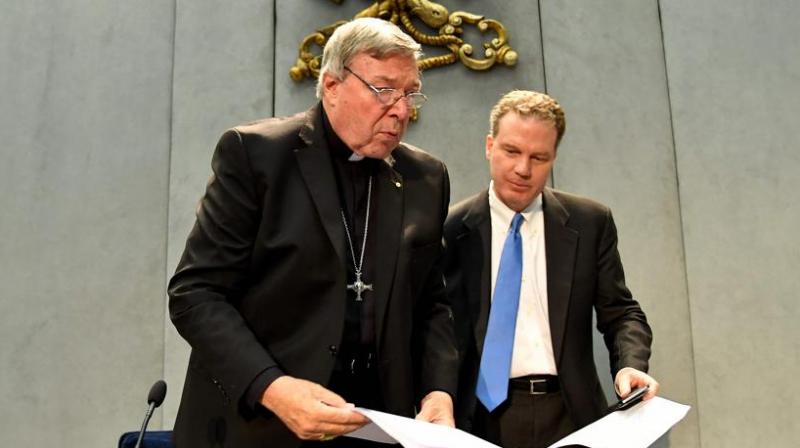 To Pell's admirers, the 76-year-old cardinal (left) embodies the orthodox traditions of Australian Catholicism, but to his critics he represents an institution that has failed to properly deal with child sex abuse allegations. (Photo: AFP)

Sydney: From country priest to trusted top Vatican aide, the rise of Australia’s most senior Catholic cleric George Pell has been plagued in its twilight by sordid controversies from the past.

To his admirers, the 76-year-old cardinal embodies the orthodox traditions of Australian Catholicism, but to his critics he represents an institution that has failed to properly deal with child sex abuse allegations.

Pell, who was charged Thursday with historical sex abuse, strongly denies the allegations, details of which were not given by police.

He also says he had no knowledge of widespread paedophilia in the church in Australia, even suggesting a conspiracy to bring him down.

Born in 1941, he grew up in the rural Australian town of Ballarat where he was a keen member of his college debating team, a lead actor in school productions and a champion Australian Rules footballer.

His devout Catholic mother was reportedly pleased that her son decided to pursue a career in the Church, whereas his father, an Anglican, was bewildered that he turned down a contract from one of the country’s top football teams.

Having chosen a religious path, he completed part of his studies in Rome before being ordained as a priest for the Ballarat diocese in 1966.

As his star rose, he went on to become Archbishop of Melbourne and then Sydney at the behest of Pope John Paul II and in 2003 was named to the Vatican’s powerful College of Cardinals, a position that allowed him to vote for the next Pope of the day.

Then in 2014 he was handpicked by Pope Francis to make the church’s finances more transparent.

“Cardinal Pell is one of the greatest churchmen that Australia has seen,” former conservative Australian Prime Minister Tony Abott has said.

From the pulpit, and publicly, Pell has espoused traditional Catholic values, from a tough stance on euthanasia and gay marriage to his rejection of climate science and criticism of harsh treatment of asylum-seekers.

But his reputation has been tarnished in recent years by claims that he covered up abuse by priests in Victoria state where he worked.

A national inquiry into the institutional responses to child sex abuse in Australia between 1950 and 2010 found that 7% of Catholic priests were accused but that the allegations were never investigated.

The inquiry, ordered in 2012, found that 4,444 alleged incidents of paedophilia were reported to church authorities and that in some dioceses, more than 15% of priests were perpetrators.

Repeatedly questioned during the inquiry about paedophile priests in the Ballarat diocese in the 1970s and 80s, Pell apologised on behalf of the church, but insisted he had no memory of claims of sustained mistreatment.

He did, however, admit he “mucked up” in dealing with paedophile priests in the 1970s, but said he was deceived by senior clergy about what was happening during a time of “crimes and cover-ups”.

Australia’s most powerful Catholic was cleared of any wrongdoing when historical accusations were levelled at him while he was Archbishop of Sydney in 2002.

But victims insist he must have been aware of the rampant abuse.