Refugee Action Coalition spokesman Ian Rintoul says most of the 1000 protesters had driven 650 km from the city of Melbourne to demonstrate. 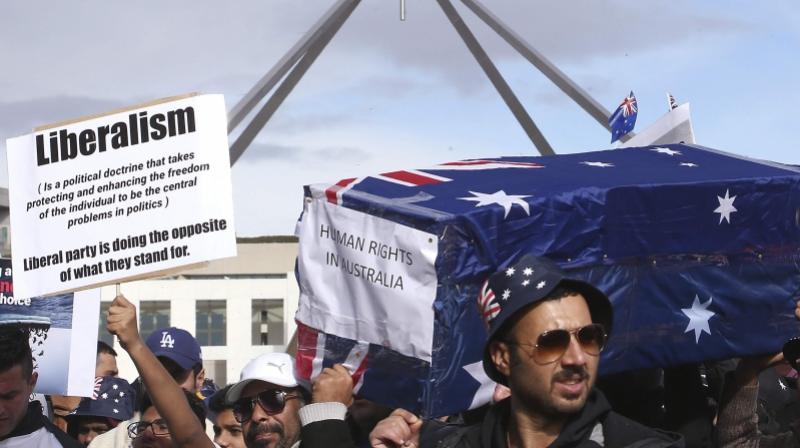 Protestors hold up a placard and a symbolic coffin during a refugee protest at Parliament House in Canberra, Australia, Monday, July 29, 2019. (Photo: AP)

Canberra: Hundreds of protesters have rallied outside Parliament House highlighting the uncertain futures of many refugees since Australia replaced permanent protection visas with temporary visas.

Refugee Action Coalition spokesman Ian Rintoul says most of the 1,000 protesters had driven 650 kilometers (400 miles) from the city of Melbourne to demonstrate on Monday.

The protesters were from Iraq, Iran, Sri Lanka, Sudan, Somalia and included Rohingya Muslims from Myanmar.

Most were in Australia on three-year visas or five-year visas that are available to refugees who agree to live outside the major cities.

The temporary visas were introduced when the conservative government was first elected in 2013 as a way of deterring asylum seekers who come to Australia by boat.

Refugees who do not arrive by boat are entitled to permanent protection visas.