Saturday marks 34 years since that the park’s title was handed back to the traditional owners. 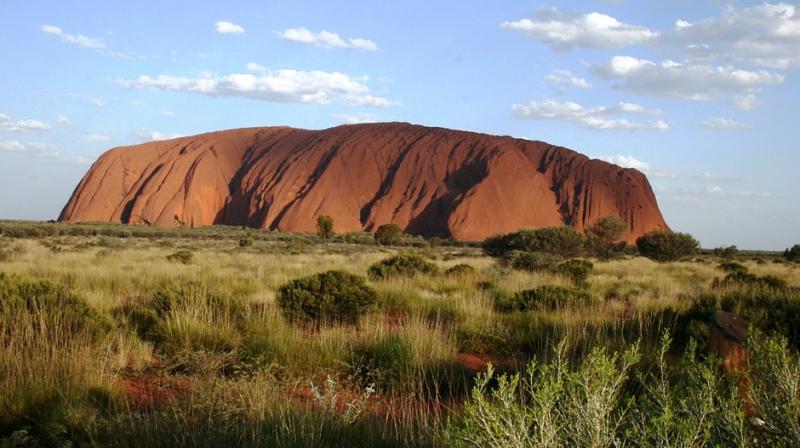 A permanent ban on scaling Uluru -- also known as Ayers Rock -- comes into place Saturday in line with the long-held wishes of the traditional Aboriginal owners of the land, the Anangu. (Photo: File)

Australia: Hundreds of tourists flocked to Uluru Friday for one last chance to scale the sacred red monolith ahead of a climbing ban long-sought by Aboriginal Australians.

A permanent ban on scaling Uluru -- also known as Ayers Rock -- comes into place Saturday in line with the long-held wishes of the traditional Aboriginal owners of the land, the Anangu.

This has led to a surge of climbers in recent months.

“I came here just to see it but it is the last day possible (to climb Uluru), so I have decided to try it,” Polish tourist Matt Oswiecimiki told AFP.

The 29-year-old said it was “fair to stop it” tomorrow out of respect for the Anangu people, but said the one time opportunity meant he would still climb it given he was allowed on Friday.

Hundreds were left waiting for hours early Friday due to safety concerns over heavy winds, before rangers allowed climbers to head up the rock at 10:00 am local time.

Parks Australia said they would reassess the weather conditions throughout the day to determine if climbers could continue to mount the rock.

Tourists are still being encouraged to visit the Uluru-Kata Tjuta National Park where they can take in the monolith from its base, walk around its perimeter and learn about its indigenous heritage at the cultural centre.

“It’s enough for me to walk around and see the rock,” Japanese tourist Masahira Suda told AFP Friday from the base of the rock.

The 25-year-old said he did not judge fellow tourists for scaling Uluru but he was refraining at the request of the Aboriginal custodians.

“I really have respect for them,” he said.

More than 395,000 people visited the Uluru-Kata National Park in the 12 months to June 2019, according to Parks Australia, about 20 per cent more than the previous year.

Around 13 per cent of those who visited during that period made the climb, park authorities said.

Uluru has great spiritual and cultural significance to indigenous Australians, with their connection to the site dating back tens of thousands of years.

Indigenous Affairs Minister Ken Wyatt likened the surge of people rushing to climb Uluru with “a rush of people wanting to climb over the Australian War Memorial”.

“Our sacred objects, community by community, are absolutely important in the story and the history of that nation of people,” he told national broadcaster ABC.

Traditional owners have long-encouraged people to refrain from climbing the site for its cultural significance, to protect it from further environmental damage and to ensure visitors’ safety.

Tackling Uluru’s sandstone slopes is not an easy exercise, and at least 35 people died attempting the climb.

Saturday marks 34 years since that the park’s title was handed back to the traditional owners.