The position of prime minister was last held by Fidel Castro in 1976. 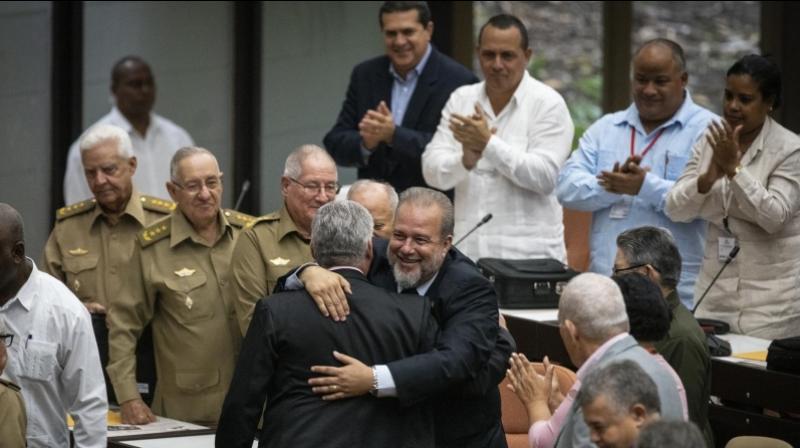 The appointment of Marrero, 56, as head of government is part of a process of decentralization and generational change from the revolutionary old guard that is aimed at extending and protecting Communist Party rule. (Photo: AP)

The appointment of Marrero, 56, as head of government is part of a process of decentralization and generational change from the revolutionary old guard that is aimed at extending and protecting Communist Party rule.

"This proposal was duly approved by the political bureau of the Communist Party of Cuba," President Miguel Diaz-Canel said, presenting it to the country's National Assembly, which unanimously signed off.

Immediately after his presentation, Marrero received a handshake from former president Raul Castro, the leader of the Communist Party.

Marrero "is not coming to the job to transform, but rather to implement and manage. The president is the one who leads," said Cuba specialist Arturo Lopez-Levy of Holy Names University in California.

Marrero served as tourism minister from 2004, late in revolutionary hero Fidel Castro's administration, continuing in the post under Fidel's brother Raul and the current president, Diaz-Canel.

He began his career in government in 1999 as vice president of the powerful Gaviota Hotel Group belonging to the armed forces, becoming its president a year later -- a post he held until 2004.

"Throughout his career... (Marrero) has been characterized by his modesty, honesty, work capacity, political sensitivity and loyalty to the party and the revolution," Diaz-Canel said.

The new premier "has led the tourism industry in a commendable fashion, which constitutes one of the main lines of development of the national economy," he added.

That is precisely why Marrero "who has all this wide-ranging experience in tourism and working with investors," is the pick, according to Lopez-Levy.

"It underscores the priority that this area holds in the country's development strategy," he said.

The position of prime minister was last held by Fidel Castro in 1976.

But the post was abolished when Castro transitioned to the presidency, taking over from Osvaldo Dorticos after the country's constitution was restructured.

Castro was a unique prime minister "given the weight of his persona," Lopez-Levy said.

"Ultimate power in the country was in Fidel's" hands during his time as prime minister from 1959-76, even though Dorticos was president and head of state, he said.

The appointment of a prime minister may signify a separation of powers but Lopez-Levy insisted that in Cuba it represents more of a "separation of functions" given the communist concept of political unity and the fact that the country is a one-party state.

Cuba's constitution required that the candidate come from the 605-member National Assembly, be at least 35, "be a Cuban citizen by birth and hold no other nationality."

The premier has the power to hire and fire state employees as well as overall control of provincial governors, another position restored under the new constitution.

Diaz-Canel also took aim at the United States on Saturday, at a time of high tensions between the superpower and the island nation.

He said that 2019 was "a year full of challenges, tension and aggression" by Washington.

The United States carried out a "brutal, insane" tightening of its long-running embargo, but "we are alive," Diaz-Canel said.