The Prime Minister said that while social media attacks were nothing new, they did appear to be disproportionately aimed at women. 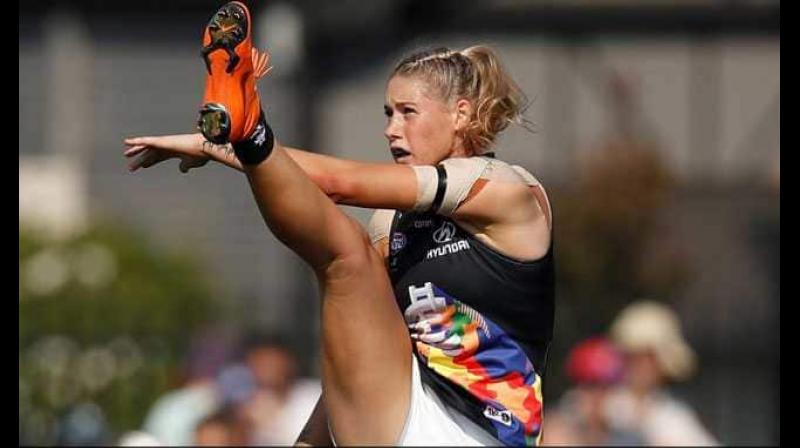 Harris, who plays for Carlton in the Australian Football League Women's (AFLW) competition, was pictured with her leg fully extended as she kicked a goal in a photograph posted online by a broadcaster on Tuesday. (Photo: Twitter)

Harris, who plays for Carlton in the Australian Football League Women's (AFLW) competition, was pictured with her leg fully extended as she kicked a goal in a photograph posted online by a broadcaster on Tuesday.

The post was pulled after a rash of comments that Harris described as "repulsive" and "sexual abuse" appeared underneath it, although the broadcaster later put it up again with an apology.

The Prime Minister waded in on Thursday, saying that while social media attacks were nothing new, they did appear to be disproportionately aimed at women.

Leaning heavily on the Australian vernacular, Morrison utilised the local word for a person indulging in disgusting behaviour to describe the online abusers.

"They're acting out some kind of hatred in a way that lessens them as people. We should give them no quarter and we should treat them as the grubs they are."

Harris, who also boxes professionally, described the online abusers as "animals" and received backing from around the world on social media.

The 21-year-old Queenslander said on Wednesday she would not be issuing a complaint to police but hoped the widespread coverage of the incident would make abusers think twice.

"I'm fine with people commenting on and critiquing my football ... but it's the comments that are severely inappropriate, comments that my family will read," she said.

"The support that has come from this has been phenomenal. I think that has shut down anyone who would have made a comment ... I hope they'd be thinking 'I've mucked up here' and hopefully they won't do it again."

Harris, listed as an All-Australian in AFLW's inaugural season in 2017, has helped Carlton to the last four of this year's edition. They play Fremantle Dockers in Melbourne on Sunday for a place in the final.