The four pilots on board -- who rotated between flying duties -- also wore devices that tracked their brain waves and alertness. 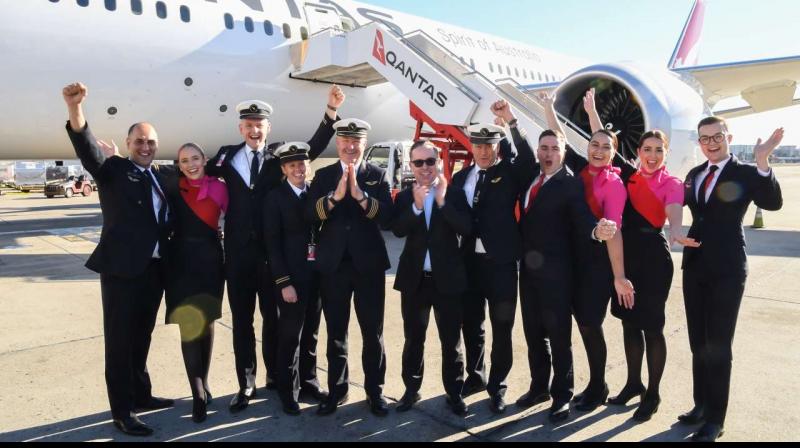 The longest non-stop passenger flight touched down in Australia Sunday morning after more than 19 hours in the air, a milestone journey from New York that Qantas hopes to parlay into commercial success. (Photo: Qantas)

Sydney: The longest non-stop passenger flight touched down in Australia Sunday morning after more than 19 hours in the air, a milestone journey from New York that Qantas hopes to parlay into commercial success.

Qantas flight QF7879 took 19 hours and 16 minutes to fly direct from New York to Sydney in the first of three "ultra long-haul" journeys planned by the airline this year.

Our very first #QantasResearchFlight has arrived at Sydney Airport with a total flight time of 19 hours and 16 minutes. pic.twitter.com/9aOOV3Nz2s

The national flag carrier is operating the test flights -- which also include one from London to Sydney -- as it weighs a rollout of regular services on marathon routes from the United States and Britain to Australia.

Just 49 people travelled on the Boeing 787-9 to minimise the weight on board and give the plane sufficient fuel range to travel more than 16,000 kilometres (9,500 miles) without re-fuelling.

Qantas CEO Alan Joyce called it "a really historic moment" for both the airline and world aviation.

"This is the first of three test flights that's going to come up with recommendations about how we manage pilot fatigue (and) how we actually manage passenger jetlag," he told reporters after arriving in Sydney.

"After 19 hours on this flight, I think we've gotten this right. It feels like we've been on a flight a lot shorter than that."

Qantas partnered with two Australian universities to monitor how jetlag affected the health of passengers and crew members as they crossed multiple time zones.

After boarding the flight, passengers set their watches to Sydney time and were kept awake until night fell in eastern Australia with lighting, exercise, caffeine and a spicy meal.

Six hours later, they were served a high-carbohydrate meal, told to avoid screens, and the lights were dimmed to encourage them to sleep through the night.

Professor Marie Carroll, a researcher from Sydney University who conducted the experiment, told AFP that she expected the innovative approach would result in "absolutely minimal" jetlag.

"I expect that they will have a normal day today and a normal night's sleep tonight," she said, adding that she felt "amazingly good" considering the flight time.

"It's all an experiment to see if airlines can adjust their schedule of food, beverages, exercise and lighting to be in sync with the destination time."

The four pilots on board -- who rotated between flying duties -- also wore devices that tracked their brain waves and alertness.

The Australian and International Pilots Association, which represents Qantas pilots, has raised concerns about whether pilots will get enough quality rest during ultra long-range flights to maintain peak performance.

It has called for a "scientific long-term study" into the impacts on crews.

The airline says the test journeys are just one facet of the work it is doing to ensure the flights are operated safely.

Qantas last year introduced the first direct service from the western Australian city of Perth to London, with the 17-hour journey one of the longest passenger flights in the world.