'He sought many things from his act of terror, but one was notoriety -- that is why you will never hear me mention his name,' Ardern said. 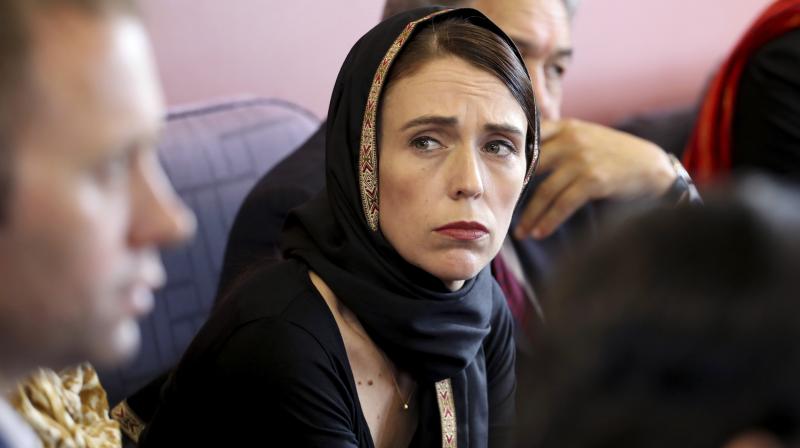 'He is a terrorist. He is a criminal. He is an extremist. But he will, when I speak, be nameless,' she said. (Photo: File)

Christchurch: New Zealand Prime Minister Jacinda Ardern vowed on Tuesday never to utter the name of the twin-mosque gunman as she opened a sombre session of parliament with an evocative "as-salaam alaikum" message of peace to Muslims.

"He will face the full force of the law in New Zealand," Ardern pledged to grieving Kiwis, while promising that she would deprive the man, an avowed white supremacist who slaughtered 50 people in Christchurch, of the publicity he craved. "He sought many things from his act of terror, but one was notoriety," she told assembled lawmakers of the 28-year-old Australian accused of the slaughter.

"That is why you will never hear me mention his name. He is a terrorist. He is a criminal. He is an extremist. But he will, when I speak, be nameless." "I implore you: Speak the names of those who were lost rather than the name of the man who took them."

Dressed in black, the 38-year-old leader opened her remarks in parliament with a symbolic gesture, repeating the greeting uttered every day across the Islamic world: "as-salaam alaikum".

She closed her address by noting that "on Friday, it will be a week since the attack, members of the Muslim community will gather for worship on that day. Let us acknowledge their grief as they do."

"Wa alaikum salaam wa rahmatullahi wa barakatuh," she said -- "May the peace, mercy, and blessings of Allah be with you too." Her comments came as dozens of relatives of the deceased began arriving from around the world ahead of expected funerals which have already been delayed far beyond the 24 hours after death usually observed under Islamic custom. Peter Elms of New Zealand's immigration department said 65 visas had been granted for overseas family members so far.

The slow process of identification and forensic documentation has so far made burials impossible, augmenting families' grief.

Javed Dadabhai, who travelled from Auckland to help bury his cousin, said families and volunteers were told: "It is going to be a very slow process, a very thorough process." "Some families have been invited to have a look at their family members... the ones that are easiest to recognise, but we are talking about three or four."

"The majority of people still have not had the opportunity to see their family members," he told AFP. Mohamed Safi, 23, whose father Matiullah Safi died in Al Noor mosque, pleaded for officials to let him identify his father get a date for his burial.

"There's nothing they are offering," Safi, an Afghan refugee, said outside a family support centre. "They are just saying they are doing their procedures, they are doing their process. But what process? Why do I not know what you are going through to identify the body... Why am I not contacted as an immediate family member?" In the wake of the mass shooting, Ardern has promised to reform New Zealand gun laws that allowed the gunman to legally purchase the weapons he used in the attack on two Christchurch mosques, including semi-automatic rifles.

New Zealanders have already begun answering government appeals to hand in their weapons, including John Hart, a farmer in the North Island district of Masterton.

Hart said it was an easy decision for him to hand in his semi-automatic and tweeted: "on the farm they are a useful tool in some circumstances, but my convenience doesn't outweigh the risk of misuse.

We don't need these in our country." The tweet drew a barrage of derogatory messages to his Facebook account -- most apparently from the US, where the pro-gun lobby is powerful and vociferous. Hart deleted the messages but posted online: "A warm kia ora to all my new American Facebook friends."

But they issued a statement saying that "due to heightened security and the current environment, we would ask that people please call us first before attempting to surrender a firearm."

Ardern has said that details of the government's proposed law changes on gun ownership will be announced by next week, but she indicated that gun buybacks and a ban on some semi-automatic rifles were under consideration.

"The terror attack in Christchurch... was the worst act of terrorism on our shores, it was in fact one of the worst globally in recent times," she said. "It has exposed a range of weaknesses in New Zealand's gun laws."