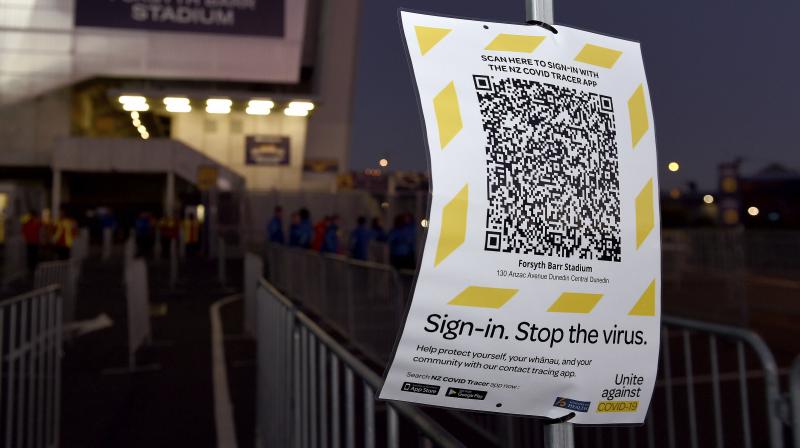 A COVID-19 QR code attached to a barrier for patrons to scan as people enter a stadium ahead of the Super Rugby Aotearoa rugby game between the Highlanders and Chiefs in Dunedin, New Zealand. (AP)

Wellington:  Prime Minister Jacinda Ardern ordered the military to oversee New Zealand's borders Wednesday after a quarantine bungle that allowed COVID-19 back into the country.

A 24-day run with no new cases was broken on Tuesday when it emerged two women who recently arrived from Britain were allowed out of quarantine early without being tested for the virus, even though one had mild symptoms.

The pair were eventually swabbed and proved to be infected, but only after they made a 650 kilometre (400 mile) road-trip from Auckland to Wellington to see a dying relative.

Ardern said it was "absolutely nonsensical" they were not tested earlier and it was clear border controls needed to be tightened to ensure similar failures were not repeated.

She said the assistant chief of defence Digby Webb had been appointed to oversee border quarantine operations and was being given access to military personnel and logistical expertise.

Health Minister David Clark said New Zealand had successfully "eliminated COVID-19" prior to latest imported cases, after recording only 22 deaths in a population of five million.

Ardern on Wednesday suspended the programme that allowed the women to be released early from quarantine on compassionate grounds, saying New Zealand's successful virus response could not be undermined.

She stressed that the women, who were visiting a dying relative, had done nothing wrong and complied with health protocols at all times.

The women remain in isolation as health officials scramble to test about 320 people they had contact with while in New Zealand.