The court allowed Philip Wilson to serve his detention at home after assessment by authorities due to range of health issues, faced by him. 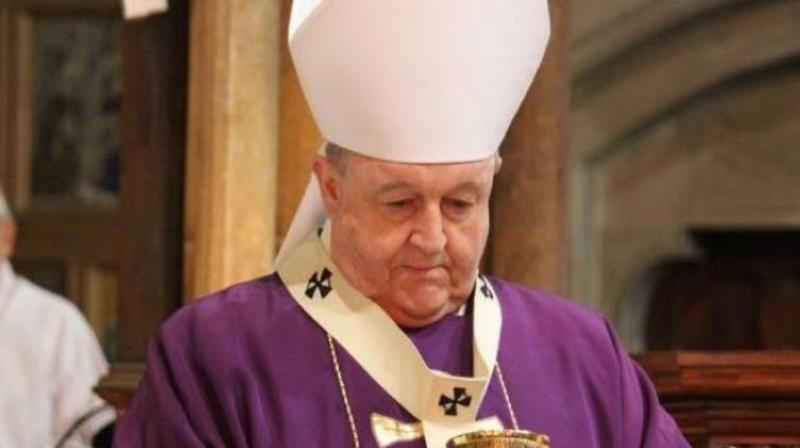 Wilson resigned as archbishop of Adelaide in July, two months after being convicted. He wanted to hold on to the position until he completed his appeal but came under pressure from Australian Prime Minister Malcolm Turnbull, fellow clerics and abuse victims to quit. (Photo: File)

Melbourne: A former Australian archbishop, the most senior Catholic cleric in the world convicted of concealing child sex abuse, was spared jail on Tuesday when he was ordered to serve his one-year sentence at home.

Newcastle Court Magistrate Robert Stone allowed Philip Wilson, 67, to serve his detention at home after an assessment by prison authorities due to a range of health issues, including heart disease, faced by the former archbishop.

Wilson was ordered to begin serving his detention on Tuesday in New South Wales state and would be eligible for parole in February 2019, the court said, without disclosing the address of where he would be held.

Australian Broadcasting Corp. Television showed Wilson being driven away from the court in Newcastle, about 170 km (105 miles) north of Sydney. It said he would be staying at his sister's house.

Wilson has said he planned to appeal against his conviction for failing to disclose to police abuse by a priest, Father James Fletcher, after being told about it in 1976 by two victims.

An angry victim of Fletcher who was not involved in the case against Wilson confronted the former archbishop outside the court, pressing him to apologise and saying the appeal process would prolong the pain suffered by abuse victims.

"Where is the contrition from former Archbishop Wilson? His Grace, as somebody just said upstairs, has shown no grace," abuse survivor Peter Gogarty said outside the court.

"This man said two weeks ago he was resigning as the Archbishop of Adelaide because of the hurt done to people like me, but I am still here and still hurting," he said.

Wilson resigned as archbishop of Adelaide in July, two months after being convicted. He wanted to hold on to the position until he completed his appeal but came under pressure from Australian Prime Minister Malcolm Turnbull, fellow clerics and abuse victims to quit.

Pope Francis named Bishop Greg O'Kelly to run the Archdiocese of Adelaide until a new archbishop has been appointed.

"Bishop O'Kelly said he was keeping Archbishop Wilson in his prayers as he formally commences this stage in his life, while also remembering the victims and survivors of abuse in the church," the archdiocese said in a statement.

Wilson would be staying at a relative's home, it said.

The Australian Catholic Bishops Conference, the country's top Catholic body that Wilson once led, had no immediate comment.