Thousands of people protested in Sydney, Melbourne and Brisbane against racism and the deaths of Indigenous Australians in custody 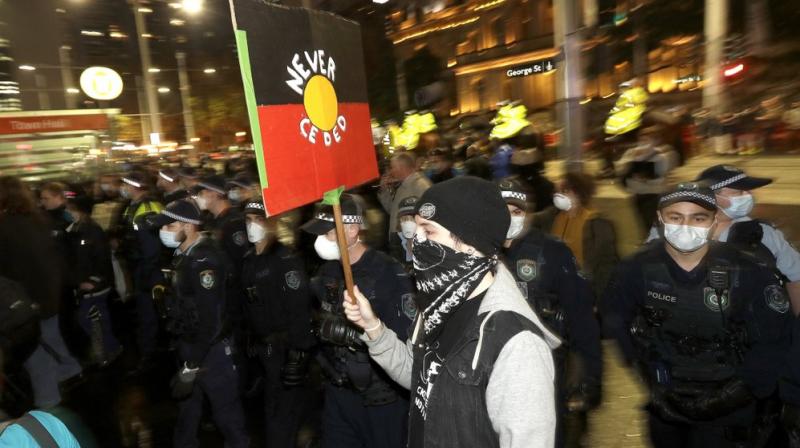 Police move in to disperse protesters that had gathered in Sydney, Friday, June 12, 2020, to support U.S. protests over the death of George Floyd. Hundreds of police disrupted plans for a Black Lives Matter rally but protest organizers have vowed that other rallies will continue around Australia over the weekend despite warnings of the pandemic risk. (AP)

Sydney: A day of demonstrations across Australia in support of the Black Lives Matter movement began Saturday with protesters gathering in the far northern city of Darwin with approval from state health authorities.

However, protesters in Sydney, Adelaide and Perth were urged to stay away by government officials concerned about the risk of spreading the new coronavirus. Police in New South Wales have warned anyone attending the Sydney protest risked being fined and arrested.

Perth was expected to be the scene of the biggest rally in Australia on the weekend, with local organizers expecting more than 8,000 people despite the city council refusing to grant a permit for the protest on the country’s west coast. West Australia state Premier Mark McGowan urged organizers to postpone the event, saying “this is about trying to save people’s lives.”

Last weekend, tens of thousands of people protested in downtown Sydney, Melbourne and Brisbane against racism and the deaths of Indigenous Australians in custody.

A man in his 30s who attended the rally in Melbourne last Saturday later tested positive for COVID-19, heightening concerns about a potential second wave in Australia just as the federal and state governments are easing restrictions.

About 1,000 protesters gathered in City Park in Darwin on Saturday to honor George Floyd and remember indigenous people who have died while in custody.

Aboriginal people and Torres Strait Islanders comprise 2% of the the country’s adult population but 27% of the prison population. They are also the most disadvantaged ethnic minority in Australia and have higher-than-average rates of infant mortality and poor health, as well as shorter life expectancy and lower levels of education and employment than other Australians.

Floyd, a black man, died in handcuffs while a Minneapolis police officer pressed a knee on his neck even after he pleaded for air and stopped moving.

The Refugee Action Coalition planned a small protest at Sydney’s Town Hall despite a Supreme Court ruling prohibiting a public assembly because of the risk of spreading COVID-19.

Instead, the activists said they would hold an “exercise protest” — asking people to walk, ride a bicycle or jog — to circumvent regulations against gatherings of more than 20 people.

One woman was fined on Friday night for disobeying a police order to move on during a Black Lives Matter protest in Sydney.

New South Wales Police Assistant Commissioner Michael Willing said the Sydney protests were not authorized and “we’ll take whatever action we need to take to ensure that the COVID health order is abided by and that the community is kept safe.”