The volcano on White Island was 'highly volatile' and could erupt again within days preventing recovery teams retrieving bodies. 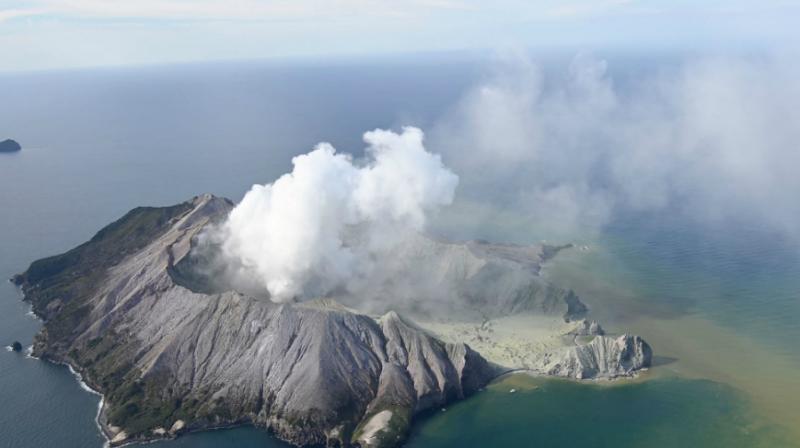 The volcano, a popular tourist day-tripper destination, erupted on Monday, spewing ash and steam over the island. (Photo: AP)

Wellington: The death toll from a New Zealand volcano eruption rose to eight on Thursday, with two victims dying in hospital, and will continue to climb with eight victims presumed dead on the island and more than 20 in intensive care suffering severe burns.

There was no sign of life on the unihabited island. "We are now living with a growing sense of desperation to bring home those that we know are there and those we love," Whakatane Mayor Judy Turner told reporters. "The frustration of those families most affected is completely understandable. No news is not good news for people in this situation."

The volcano, a popular tourist day-tripper destination, erupted on Monday, spewing ash and steam over the island.

There were 47 people on the island, also known by its Maori name Whakaari, at the time of the eruption. Twenty-four of those were from Australia, nine from the United States, five from New Zealand, four from Germany, two each from China and Britain and one from Malaysia. Nico Fournier, a volcanologist at New Zealand's geological science agency GNS Science, said monitoring equipment still active on the island put the risk of a further eruption over the next 24 hours at 50 per cent to 60 per cent.

"We believe that there is shallow magma, the molten rocks, which is driving the activity under the surface ... which is the level of tremor that is increasing, and it keeps increasing as we speak as well," Fournier told reporters.

"The consequence of those processes is that the situation remains highly volatile," he said.

In the event of another eruption, anybody on the island could be "pummelled to death" by flying rocks or overcome by ash and gases in temperatures exceeding hundreds of degrees celsius, Fournier said.

New Zealand Deputy Police Commissioner Mike Clement said the risk of both another eruption and toxic gases were simply too great to expose recovery teams, although the situation was being constantly reviewed.

"I don't have a plan that satisfies me that the risk is able to be mitigated ... to keep people safe," Clement told reporters. "I can't give an assurance around a timeline because the reality is I don't control all of the factors yet."

Royal Caribbean cruise lines have said that passengers from its ship Ovation of the Seas were on the island at the time. The company said it grieved "this tragic loss" and would continue to offer support and services to affected families. It did not respond to requests for more detail.

The Ovation of the Seas docked in Wellington on Thursday morning.

Many of the injured are being treated for severe burns, and medical officials are importing some 1.2 million square cm (186,000 square inches) of skin. The amount of skin needed equates to about 60 donors. In New Zealand, only five to 10 people donate skin each year, the New Zealand Herald newspaper reported.

Teams of surgeons in several burns units around the country were working around the clock. "It's one of the most challenging things to look at because you know the patients are in so much pain and will be fighting for their life for the next two or three weeks and even then they could die," John Bonning, president of the Australasian College for Emergency Medicine, told the newspaper.

Australian Prime Minister Scott Morrison said medical teams had completed the transported five Australians back home for treatment. Another seven Australians would be evacuated over the next 24 hours and one citizen would remain in a NZ hospital.

Morrison said 11 Australians had died, a figure that is believed to be drawn from the 16 people officially listed dead and missing by New Zealand. Further, he said two permanent residents of Australia had died, one was missing and a fourth was hospitalised.

"In the days ahead, there will be worse news," Morrison told reporters in Melbourne, adding that the repatriated Australians would be closer to family.

"They will have difficult rehabilitations as a result of their injuries in many cases," he said.

Prime Minister Jacinda Ardern has said there will be an inquiry into the tragedy, which will also look more broadly at issues including access to volcanic sites across New Zealand.

Geological hazards agency GeoNet raised the alert level for the volcano in November because of an increase in volcanic activity. The alert level was increased further after the eruption.

Geonet reduced the level on Thursday because there has not been any further eruptions activity since Monday's fatal eruption, but the agency cautioned that the "likelihood of future eruptive activity in the next 24 hours remains" as volcanic tremors increased to "very high levels" overnight.