The opposition, along with many gay rights campaigners, favour a free vote among MPs, with parliamentarians not bound by party policy. 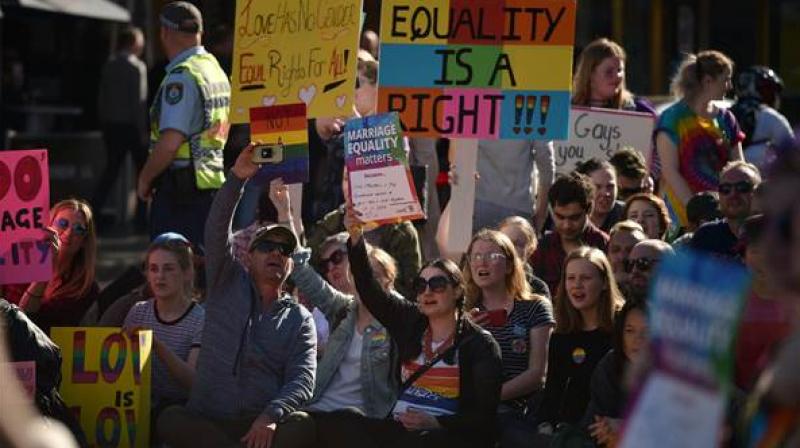 Supporters of same sex marriage carry banners and shout slogans as they gather on a street in Sydney. (Photo: Representational/AFP)

Sydney: Australia's bitter political battle over legalising gay marriage came to a head Wednesday, with the government pushing ahead with a postal vote after parliament rejected a referendum both options bitterly opposed by activists.

Polls indicate popular support in Australia for marriage equality, but the issue has dragged on for more than a decade amid political wrangling over the best way to vote on the issue.

The conservative Liberal-National coalition last year went to the polls promising to hold a nationwide plebiscite, but the opposition Labor Party, Greens and crossbench senators on Wednesday rejected the option in the upper house Senate for the second time.

The opposition, along with many gay rights campaigners, favour a free vote among MPs, with parliamentarians not bound by party policy. They say a national vote is costly and will prove divisive, subjecting gay people and their families to hate speech.

Prime Minister Malcolm Turnbull Tuesday committed Aus$122 million (US$97 million) to the postal vote, run by the Australian Bureau of Statistics, with ballot papers sent out by September 12 and due back early November. "Strong leaders carry out their promises. Weak leaders break them," he said. If it returns a "yes" outcome, the government will table a private bill on parliament's lower house, where the Liberals could cast a free vote by December. If "no" is the result, the issue will not go to parliament.

Marriage equality advocates have vowed to challenge the postal vote in court, saying the government might be exceeding its executive authority in holding it, casting doubt on whether the ballot would go ahead.

Supporters also fear the postal option could disenfranchise younger Australians usually more supportive of same-sex marriage who are less likely to use the mailing system.

Former conservative prime minister Tony Abbott Wednesday welcomed the postal vote, kicking off the "no" campaign. "If you don't like same-sex marriage, vote no," he told reporters. "If you are worried about religious freedom and freedom of speech, vote no. If you don't like political correctness, vote no."

Labor senator Penny Wong made an impassioned speech in parliament, accusing the government of "handball(ing) a hard decision to the community" and also of failing to defend the LGBTI community against hate speech.

"Let me say, for many children in same-sex couple parented families and for many young LGBTI kids, this ain't a respectful debate," she said.

Same-sex couples can have civil unions or register their relationships in most states across Australia, but the government does not consider them married under national law.