Australia's election became a little more raucous when a protestor tried -- but failed -- to crack an egg on PM Scott Morrison's head. 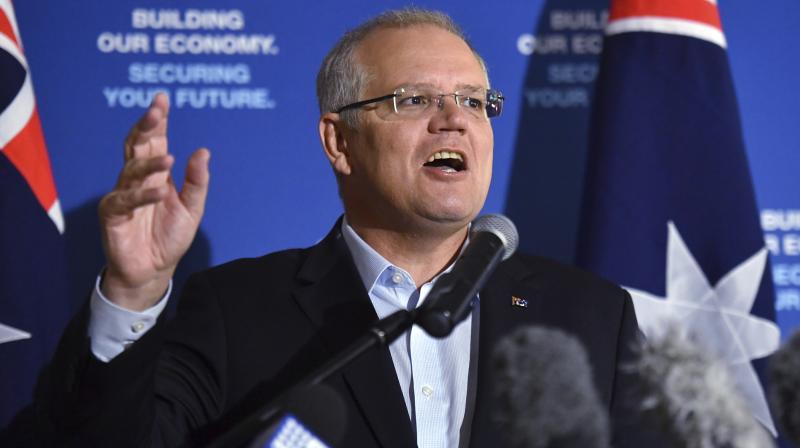 The woman was wrestled away by Morrison's close protection security detail and could later be seen leaving the venue holding an egg carton. (Photo:AP)

Canberra: Australia's election became a little more raucous on Tuesday when a protestor tried -- but failed -- to crack an egg on Prime Minister Scott Morrison's head.

The attacker's egg, thrown from close range, appeared to bounce off the politician at a Country Women's Association event in New South Wales, where Morrison was campaigning ahead of May 18 general elections.

The woman was wrestled away by Morrison's close protection security detail and could later be seen leaving the venue holding an egg carton.

New South Wales police said they had taken a "25-year-old woman into custody following an incident involving the Prime Minister in Albury".

It was not yet clear whether she would be charged.

In the fracas, an older woman was bundled over, and Morrison -- who is trailing in the polls ahead of the May 18 vote -- had to help her up.

Morrison seized on the incident to attack his political detractors.

"My concern about today's incident in Albury was for the older lady who was knocked off her feet. I helped her up and gave her a hug," he tweeted.

"We will stand up to thuggery whether it's these cowardly activists who have no respect for anyone, or militant unionists standing over small businesses and their employees on work sites."

"How dare you accuse us of this & make the association," she tweeted.

"You seem to have no respect for the truth or any concern about running down your fellow Australians. We would never support such behaviour."

"The prime minister has my complete sympathy," he added, telling reporters in Melbourne: "In Australia we have violence-free elections."

The incident followed a highly publicised assault of far-right politician Fraser Anning, who had an egg smashed on his head during a press conference.

His teen attacker had been protesting comments Anning made blaming the massacre of 51 Muslim worshippers in two Christchurch mosques on immigrants to New Zealand.