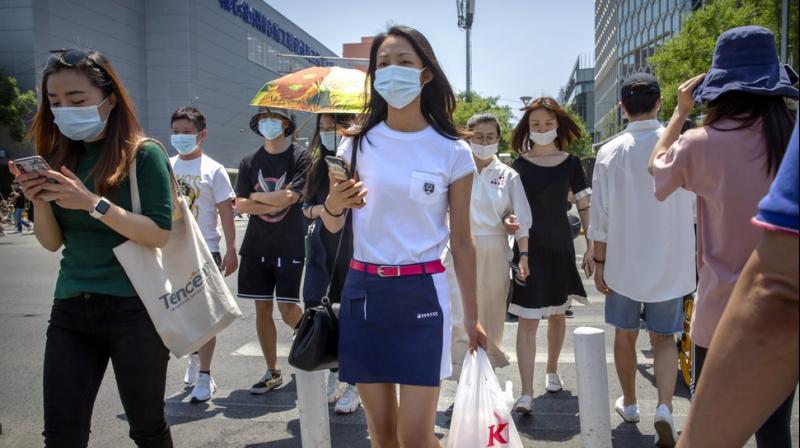 People wear face masks to protect against the coronavirus as they walk across an intersection in Beijing. (AP)

Beijing: China is advising its citizens not to visit Australia, citing racial discrimination and violence against Asians, in what appears to be Beijing’s latest attempt to punish the country for advocating an investigation into the coronavirus pandemic.

A notice issued by the Ministry of Culture and Tourism late Friday said there has “been an increase in words and deeds of racial discrimination and acts of violence against Chinese and Asians in Australia, due to the impact of COVID-19 pandemic.”

“The ministry advises Chinese tourists to raise their safety awareness and avoid travelling to Australia,” the notice said.

As part of its perceived retaliation, China has already effectively ended imports of Australian barley by putting tariffs of more than 80% on the crop, accusing Australia of breaching World Trade Organization rules by subsidizing barley production and selling the crop in China at below production costs. That came a week after China banned beef imports from Australia’s four largest abattoirs over labeling issues.

Australian Trade Minister Simon Birmingham on Tuesday said the country did not want a trade war, but said China “has made errors of both fact and law” in applying WTO rules, adding that there was no evidence that Australia was engaged in dumping of products.

Australian has been among countries pushing for an international investigation into the origins of the coronavirus pandemic and responses to it. Beijing has denied its measures against Australian beef and barley were related to those calls.

The World Health Organization has bowed to calls from most of its member states to launch an independent probe into how it managed the international response to the virus, which was first found in China late last year. The evaluation would stop short of looking into contentious issues such as the origins of the virus.

Chinese Ambassador Cheng Jingye’s has told Australian media that the country might face a Chinese boycott of its tourism and exports of wine, beef and other goods if the government pressed for a coronavirus inquiry.

China is the No. 1 market for Australian beef, accounting for about 30% of exports. It’s also the biggest foreign buyer of Australian barley.

Beijing has regularly used access to its huge market to punish governments from Norway to Canada in political disputes. Chinese officials routinely refuse to confirm a trade disruption is related to a political clash but make it clear Beijing wants concessions.