Daily new cases are now close to single figures, while some parts of the country have not seen a case in more than a week 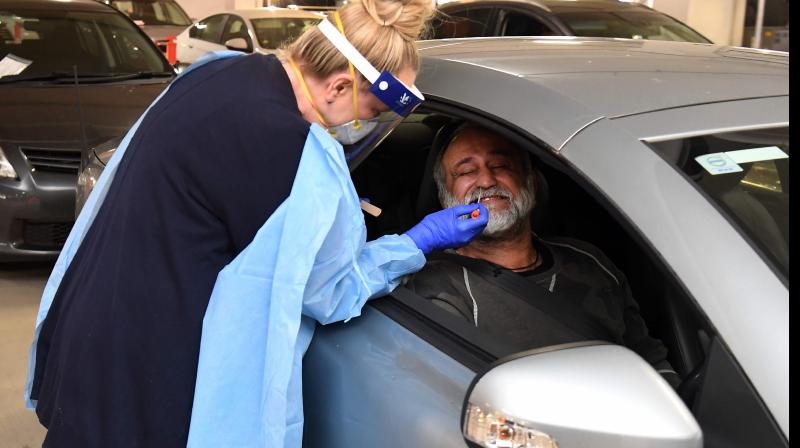 Medical staff perform a test for the COVID-19 coronavirus on a driver at a drive-through testing site in a Melbourne carpark. (AFP)

Sydney: Australia will consider early easing of coronavirus restrictions next week, officials announced Friday, as the number of local cases dwindled and the economic impact of the crisis fell into painful relief.

Prime minister Scott Morrison said the national cabinet would meet on May 8 -- a week earlier than expected -- to weigh loosening social distancing measures that have kept millions of Australians at home, barred almost all travel and slowed business to a crawl.

"We need to be able to move ahead."

Australia has detected almost 7,000 COVID-19 infections, but new daily cases are now close to single figures. Some parts of the country have not seen a case in more than a week.

Meanwhile millions of Aussies have seen their work hours cut, an estimated one-in-three have been hurt financially and the unemployment rate is set to roughly double to 10 percent.

Even if businesses are allowed to reopen and restrictions on movement are lifted, the authorities are warning a quick return normal is unlikely.

"Wherever you go, however you interact, you'll need to practice distancing, and that is just a long-term adjustment that we all have to make."

Morrison said that any easing would also require more people to download an app that can help track new clusters of the virus.

So far 3.5 million Australians have downloaded the COVIDsafe app since it was launched Sunday evening, an impressive number Morrison said was still not enough.

"That is the ticket to opening up our economy," he said, adding that any decision on easing restrictions would have to be carefully calibrated to avoid a resurgence of COVID-19 and the need to reimpose a lockdown.

"We've got to be like the emblems on our coat of arms, the kangaroo and the emu, they only go forward, and we only want to go forward," Morrison said.

It was less clear whether travel restrictions -- including a virtual ban on international travel -- will be lifted.

Morrison said that he expected net migration to fall by a third this year and 85 percent next year -- delivering a significant hit to an economy that was already expected to go into recession.