In the first days of the pilgrimage, many were seen holding their phones aloft to livestream their progress to friends and family back home 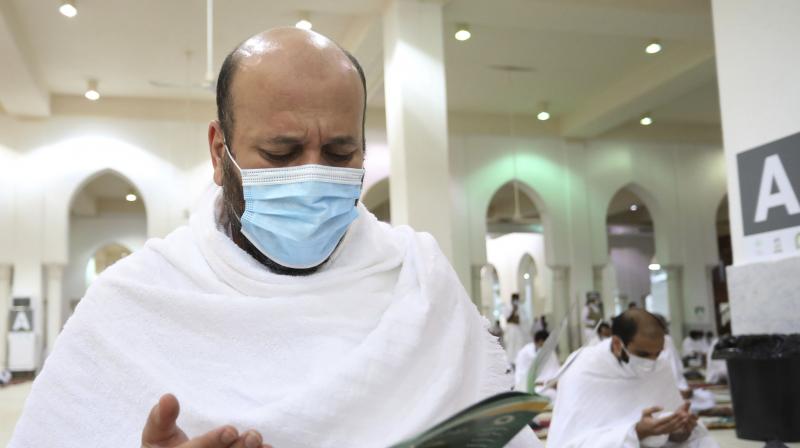 A Muslim pilgrim prays inside the Namira Mosque in Arafat as he wears a mask to protect himself against coronavirus during the annual hajj pilgrimage near the holy city of Mecca, Saudi Arabia. (AP)

Khobar: Faridah Bakti Yahra travelled alone to Mecca when she won the lottery of a lifetime to join this year's hajj, the smallest in living memory, but her family is relishing the experience virtually.

Thanks to her smartphone, and the 5G towers that loom over the holy city, the Indonesian housewife is sharing every step of the pilgrimage with her husband and three daughters back home in the Saudi coastal city of Khobar.

"I am so happy he joined me virtually, spiritually, with my daughters also. May my dear husband come here together with me again for hajj -- inshallah (God willing)," the 39-year-old told AFP.

In the first days of the pilgrimage, many of the faithful were seen holding their phones aloft to snap selfies and livestream their progress to friends and family back home.

Super high-speed 5G technology was rolled out in Mecca last year, allowing pilgrims to transfer data at breakneck speeds, and the network is now prevalent across much of Saudi Arabia.

But this year the shared religious experience has even greater resonance, with the gathering scaled down from more than two million people to just a few thousand, and at a time when many prayers are being offered for a world gripped by the novel coronavirus pandemic.

Yahra opened a video call on the first day of the hajj at Mecca's Grand Mosque when she approached the Kaaba, a large cubic structure draped in gold-embroidered black cloth, towards which Muslims around the world pray.

"When my wife entered the Kaaba area and she showed me the Kaaba, I felt very, very cheerful, joyful, with tears," her husband Hendra Samosir said.

"It was very truly a holy journey I would say, even though I wasn't there, but looking at my wife attending this hajj, it feels like I was there."

Hundreds of thousands of Indonesians usually take part in the hajj, many waiting and saving for years before their turn comes up.

This year, there are believed to be hardly more than a dozen in Mecca.

Yahra was selected in a process that for the first time excluded pilgrims from outside the kingdom.

Muslims worldwide were disappointed, even though most accepted that a hajj on the usual scale was out of the question.

Foreign residents make up 70 percent of the group and Saudi citizens make up the remainder, drawn from medical professionals and security personnel who have recovered from the virus.

There were grumbles over what was seen as an opaque system, and those who missed out swamped the hajj ministry's Twitter account with anguished queries.

But for Samosir, who opted to stay at home and look after the couple's children, his wife's selection was "very good news" after months of bad news due to the novel coronavirus pandemic.

The virus crisis triggered months of lockdown in Saudi Arabia and a slump that saw the 44-year-old lose his job in the oil industry.

But he said the virtual pilgrimage left him feeling "like an empty bowl filled up with water".

In recent years, the hajj has been at the centre of an acceleration in the growth of digital worship, with a slew of religious apps and tablet Korans.

But the tech is not limited to reading on screens and sharing stories. It has rapidly evolved to offer pilgrims the possibility of performing religious duties from their homes.

Online platforms have emerged allowing worshippers to virtually perform the year-round umrah, or minor pilgrimage, which usually takes only a few hours.

The service is based on the concept of outsourcing the pilgrimage -- asking someone in Saudi Arabia to perform umrah on their behalf, and experiencing it through a live virtual reality tool.

Some Islamic clerics support the idea, while others say only the sick are entitled to such an option.

And the situation is different with the hajj, a journey made over several days that requires walking for kilometres, praying for hours, and sleeping outdoors.

Some of this year's pilgrims have reported that performing the pilgrimage on such a small scale has been an intensely spiritual experience.

"I am praying for my husband to get back to work again," Yahra said.

"And I pray for the situation to get back to normal again, for the pandemic to stop, and for coronavirus to be gone."