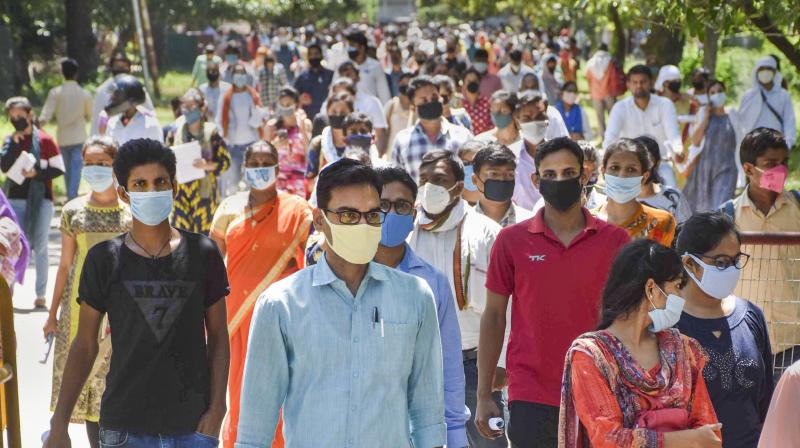 Several Indian students say the Supreme Court's refusal to allow exam centres for the NEET in Gulf countries has left them the lurch. (Representational Image: PTI)

New Delhi: Travelling to India to write medical entrance exam NEET is not only stressful but also impractical, several candidates in Gulf countries have said, citing the risk of contracting COVID-19 and the need to undergo a mandatory quarantine, among other issues.

"What choice do I have? It is impractical," said Royston Mendonca, who is based in Dubai.

Several Indian students like him said the Supreme Court's refusal to allow exam centres for the NEET in Gulf countries has left them the lurch. Many of these students have their JEE Main exam in the Gulf and the NEET in India.

While exam centres have been set up abroad for JEE Main, there is no such plan for NEET.

Reaching India in time to be able to complete the mandatory quarantine period before the exam, arranging a stay before taking a flight back home, additional expenses, the risk of contracting COVID-19 and being quarantined again back home, are among several concerns on the mind of the aspirants.

The National Testing Agency (NTA), which conducts medical and engineering entrance exams, has decided to hold NEET on September 13 and Joint Entrance Examination (JEE) Mains from September 1 to 6.

Mendonca told PTI over phone from Dubai, "Even if I take the next possible Vande Bharat flight, I will not be able to finish my quarantine period by then. And how can one appear for such a crucial exam amid this much stress."

Shailaja Vishwanathan, a Doha-based candidate, said, "I had contacted the Indian embassy here and I have been told that though I had not applied earlier, I would be accommodated in the next Vande Bharat flight. But it is too much of a hassle right before an exam for which I have been preparing for two years. I wish I was able to take the exam in Doha, but I don't have much choice. I will go anyhow."

Jonathan Vergis, who resides in the United Arab Emirates (UAE), has to write both these exams, the JEE-Main in Dubai on September 3 and the NEET in India 10 days later.

"If I leave after this exam (JEE Main), I will not be able to finish the quarantine period before September 13, when the NEET exam is scheduled," he said.

However NTA officials said the JEE exam centre in such cases can be shifted to India and the students should reach out to the agency.

NEET candidate Jasim, a resident of Saudi Arabia, said, "This is very impractical. I have not travelled alone before this. If my parents fly with me, we will have to bear extra cost which is an added burden at the moment. The time taken to complete the quarantine, appearing for exam and then completing quarantine here once back, will require a lot of leaves from work for them too. We are still working out what to do."

Another candidate based in Oman, who did not wish to be identified told PTI, she has decided not to appear for the exam this year.

"I think I will take the exam next year now. I know a year is precious but it is just not feasible to travel to India for the exam now. I was really hoping that they either postpone the exam or set up centres in Gulf countries too," she said.

On Monday, the Supreme Court of India declined to pass direction to the Central government to hold NEET in Gulf countries. The court directed the government to allow students to come through Vande Bharat Mission flights to write the exams.

The SC was hearing a plea filed by parents of nearly 4,000 NEET candidates, who alternatively had sought to postpone the examination until the coronavirus pandemic subsides.

The parents of these candidates, who reside in Doha, Qatar, Oman and the UAE, had approached the apex court challenging the High Court of Kerala order which had dismissed their plea in June.

The NTA informed the Supreme Court that it had duly consulted the MCI (Medical Council of India) on the students' demand for overseas test centers.

However, the MCI had clarified that since the exam is conducted in pen and paper mode, it will not be feasible to have a different pattern for Gulf countries or establish a centre there amid the pandemic situation.

Among Indian states too, there has been a growing chorus for postponing the two exams in view of a spike in COVID-19 cases. However, the Ministry of Education has clarified the exams will be conducted on schedule in September as any further delay now can lead to a zero academic year.

These exams have already been deferred twice in the wake of the coronavirus pandemic.