Toll in terror attack on Saleh office rises to 20

The explosion took place at Shaheed Circle in Kabul's Police District 4 (PD4) at around 4:40 pm (local time) on Sunday. 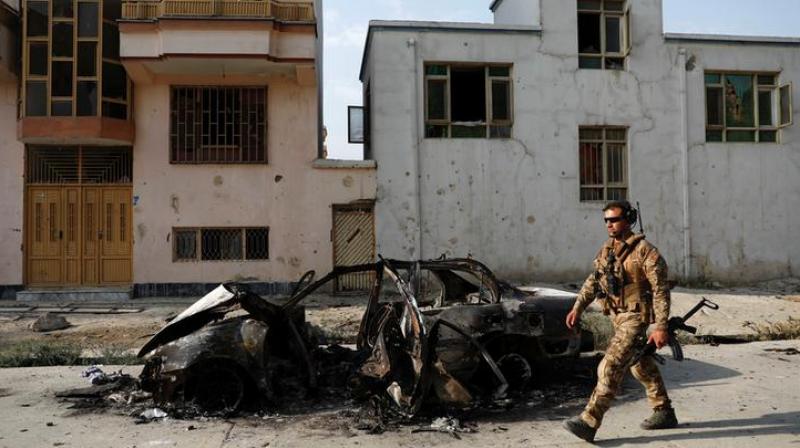 The attack, which continued for six hours, left 50 others injured. At least 16 people were civilians among killed. (Photo: ANI)

Kabul: The death toll in the terror attack of Kabul that targeted the office of Vice Presidential candidate Amrullah Saleh has mounted to 20, announced Afghan Interior Ministry on Monday.

The attack, which continued for six hours, left 50 others injured. At least 16 people were civilians among killed.

The complex attack was carried out by at least four terrorists. It was started with a car bombing. Saleh was in the office at the time of the attack and was immediately evacuated.

The attack ended at around 11 pm on Sunday night and all four attackers were gunned down.

President Ashraf Ghani on Monday visited the residence of Saleh.

The incident was condemned by India, Pakistan, the United Nations and the Afghan government.

Condemning the attack, Ministry of External Affairs said: "India strongly condemns the terrorist attack in Kabul today in which a number of innocent Afghans were killed. India expresses its deepest condolences with the families of the deceased."

"This dastardly attack was also aimed at undermining the constitutional and democratic processes and institutions in Afghanistan. India stands in solidarity with the Government and the people of Afghanistan in their efforts to achieve enduring peace, security and stability in Afghanistan," the statement read.