Syria's Assad visits Russian air base after US warning

Assad has been touring areas north and northwest of Damascus in recent days, a rare trip out of his seat of power in the capital. 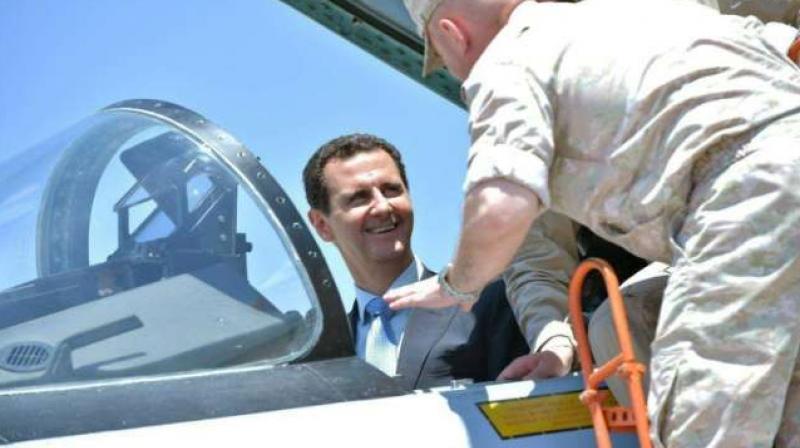 President Bashar al-Assad inside an Su-27 fighter jet during a visit to the Hmeimim military base in Latakia province. (Photo: AFP)

Beirut: Syrian President Bashar al-Assad visited a Russian air base at Hmeymim in western Syria on Tuesday, his first visit to the base from which Russian jets have played a crucial role in support of his war effort.

Photos circulated showed the Syrian leader in the cockpit of a Russian Sukhoi SU-35 warplane. He inspected weapons, personnel and armoured vehicles at the base near Latakia. He was accompanied by Russian chief of staff General Valery Gerasimov, state news agency SANA reported.

“The Syrian people will not forget that its Russian brothers stood next to them in this national war,” Assad wrote in a visitors’ book at the base, SANA reported.

The base has been at the heart of Moscow’s military effort in support of Assad since 2015, when the Russian air force began bombing insurgents who were threatening his grip on power. Assad has also been backed in the war by Iran.

Assad has been touring areas north and northwest of Damascus in recent days, a rare trip out of his seat of power in the capital that has reflected his confidence, with his military position seemingly unassailable in western Syria.

On Sunday he performed Eid prayers in the city of Hama, the first time he has visited the city since the start of the conflict. Assad has also visited wounded soldiers in the Hama countryside, accompanied by his wife Asma and children, state media reported on Tuesday.