Return of Israeli-Arab hostilities can only flare up regressive passions

The fledgling peace process in the region could implode with the furies over the expected outrage from such a move in the Arab world. 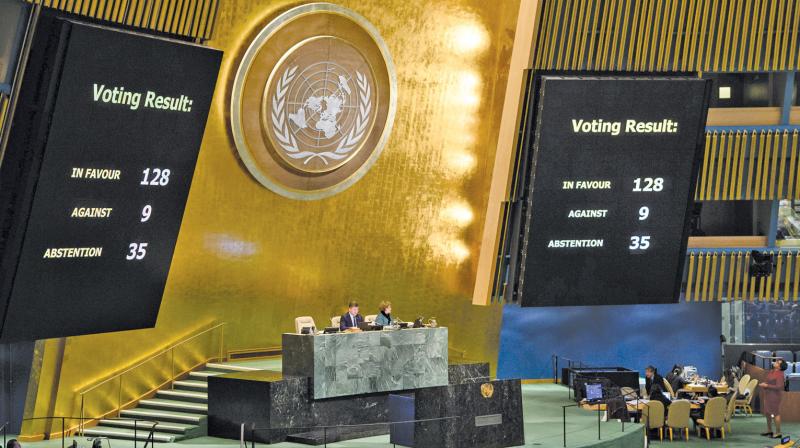 The UN General Assembly voted 128-9 with 35 abstentions in favour of a non-binding resolution declaring President Donald Trump’s recognition of Jerusalem as Israel’s capital ‘null and void’, a smaller margin than the Palestinians hoped for but also a rebuke to the US, which is threatening to cut funding for those who voted ‘yes’. (Photo: AP )

Abrahamic religions” like Judaism, Christianity and Islam account for more than half of the world’s population. Adherents of these monotheistic faiths believe in Prophet Abraham as their common forefather. Abraham (Avraham in Hebrew) is believed to be the patriarch of “Israelites” in Judaism (through his descendants Issac and Jacob), in Christianity he is the “father in faith” and in Islam, Abraham’s (Ibrahim’s) son Ishmael is seen as the ancestor of the Arabs. The commonality of heritage and ancestry is inherently implied in the composite Islamic term “People of the book” to also include Jews, Christians and Sabians. The historical Abrahamic lands are called the “holy lands” (“biblical lands”) that are in the arid swathes between the Jordan river and the Mediterranean Sea, including the modern states of Israel, Palestine, Jordan, Lebanon and Syria with towns like Bethlehem, Nazareth, Hebron, Damascus, etc, dotting the restive areas. However, it is the ancient city of “Urusalima”, now known as Jerusalem that is the coveted holy city at the heart of the modern-day strife.

The date palm and cypress tree lined old quarters of Jerusalem host the Temple Mount (Haram Al-Sharif), which the Jews believe was the location of the “First Temple” to house the Ark of the Covenant (housing the Ten Commandments) in a special room called the “Holy of Holies”. In Islam, the Haram Al-Sharif (noble sanctuary) is the third holiest site after Mecca and Medina, where the rock under the Dome of the Rock (near Al-Aqsa Mosque) is where Prophet Muhammad left Earth to go to heaven on a winged horse — it was said to be the direction for Islamic prayers before God allowed Prophet Muhammad to pray facing Mecca. In Christianity too, the significance of Jerusalem is conserved in the Septuagint which Christians adopted as their authority, and reiterated in the New Testament on account of Jesus’ crucifixion here — the Garden Tomb, Condemnation Chapel, Chapel of Flagellation, etc, are deeply revered for their religious import. Oddly, this city and cradle of “Abrahamic religions” is also at the heart of the hypothesis of the “clash of the civilisations”, propounded by American political scientist Samuel P. Huntington.

Despite the theological beliefs and ethical principles underlying the affinity within the “Abrahamic religions”, the “city of peace”, Jerusalem, has been destroyed at least twice (by Babylonians, Romans and even Mongols), besieged 23 times, attacked 52 times and exchanged hands 44 times! The centuries old struggle to control Jerusalem led to the division of the old city into the Armenian, Jewish, Christian and Muslim quarters. The more recent history of the Zionism and the war of 1948 leading to the creation of Israel also saw the division of the city of Jerusalem into two parts — West Jerusalem was captured by Israel, while East Jerusalem, including the old city was captured by Jordan. This changed after the “six-day war” of 1967, when Israel captured and annexed East Jerusalem parts, setting the tone for the modern day “Abrahamic divide”. This contentious move was further escalated by Israel when the Israeli Knesset passed the “Jerusalem Law” in 1980 to legitimise the Israeli claim of integrity and unity of “Greater Jerusalem” (Yerushalayim rabati).

The major implication was the designation of Jerusalem (“complete and united”) as the capital of Israel, the seat of the Israeli President, the Knesset, the government and the Supreme Court. It further allowed Israel to protect the holy places from “desecration and any violation and from anything likely to violate the freedom of access of members of the different religions to the places sacred to them or their feelings towards those places”. The Israelis call Jerusalem the “eternal capital of Jewish people”, whereas the state of Palestine (a US observer state, recognised by 136 UN member states) calls East Jerusalem its capital city, in an overlapped clash of territorial counter-claims.

The clashing claims have resulted in many interfaith bloodsheds, with the Palestinian Liberation Organisation (PLO) successfully centralising the issue of “Jerusalem” to the Palestinian resistance, that was subsequently escalated by other factions and supporters like Hamas, Hezbollah and the Iranian establishment which went to the extent of observing “Jerusalem Day” and concurrently threatened to “wipe Israel off the map”. These competing emotions have made the future status of Jerusalem to be the symbolic pivot, for tilting scales in favour of either the Israelis or the Arabs. Historically, the move to declare Jerusalem to be the capital of Israel was a favourite bogey in the run-up to the US presidential elections (given the power of the Jewish lobby), and usually put on the backburner after the elections as the derivative value and potential outcomes emanating from such a contentious declaration simply did not make sense.

However, Donald Trump is no Bill Clinton or George Bush who chose to keep the lid on the issue of Jerusalem, and certainly not Barack Obama, who went on to support a UN Security Council resolution that criticised Israel for its settlement activities in West Bank and Jerusalem. On the contrary, Mr Trump has decided to stir the hornets’ nest by provocatively threatening to declare Jerusalem as the capital of Israel. The fledgling peace process in the region could implode with the furies over the expected outrage from such a move in the Arab world. Already the region is reeling under the imploding faultlines of revisionist religiosity and sectarian strains — the return of the old binary of Israeli-Arab hostilities can only flare up regressive passions and worse, distract global efforts from defeating terrorism from the region. Besides the Arabs, the EU, Russians and most other powers have slammed the Trump move, which if carried out, effectively closes the door on East Jerusalem as the future capital of a fully-independent Palestine. Yet again, the lightening rod threatens to strike the Abrahamic divides that have endured with the rules of the Roman, Byzantine, Umayyad, Mameluke, Crusader, British, Arab and now the Jewish state.