India's Ambassador to Israel said that terrorist attack on Indian soil 'should motivate world to unite against terrorism and defeat it'. 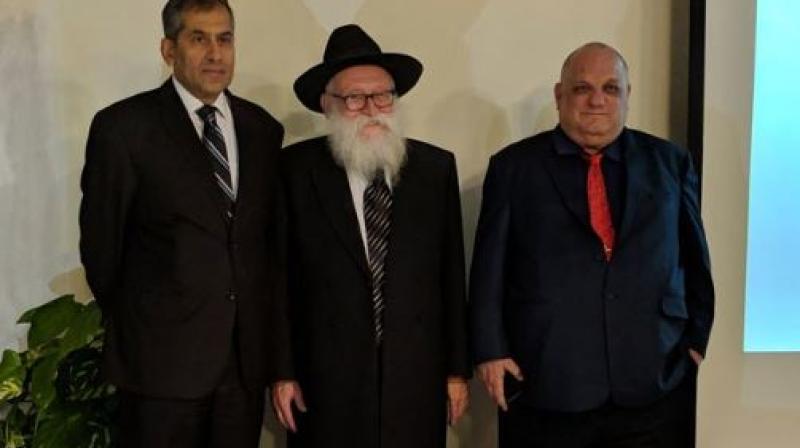 Members of the Ministry of Foreign Affairs of Israel pay tribute to the Mumbai terror attack victims. (Photo: Twitter | IndiainIsrael)

Tel Aviv: Israel has called upon Pakistan to "ensure full justice" to the 26/11 terror attack victims on the 10th anniversary of the carnage that had left 166 people, including six Israelis, dead in Mumbai.

At a memorial event organised on Monday evening by the Indian mission here to mark the anniversary, Michael Ronen, Director, South & South East Asia Division at the Ministry of Foreign Affairs of Israel emphasised that it was important for the international community, especially Pakistan, to ensure that the perpetrators and facilitators of the ghastly attacks do not go scott free.

"It is important to provide full justice to the victims and their families," Ronen said, urging "all governments, including the Government of Pakistan, to ensure that perpetrators and facilitators of the attack are brought to justice."

The Israeli diplomat also underlined that the objective of the attack was to cripple the Indian society, economy and culture, as well as the growing bilateral relationship between India and Israel.

In this regard, "the terrorist attack failed miserably as the Indian economy has continued to grow stronger, its culture remains invincible and bilateral ties continue to reach new heights," he noted. Asserting that terrorism can only be defeated by international cooperation, Ronen "again called upon the Government of Pakistan to ensure full justice to the victims and their families."

The event was attended by members of the Indian community in Israel, some Indians visiting the country and also Rabbi Shimon Rosenberg, who lost his daughter Rivka and son-in-law Rabbi Gavriel Holtzberg in the attack on Nariman House.

The couple's two year old son, Moshe, survived the attack thanks to a daring move by his nanny, Sandra Samuels, who risked her own life and rescued the boy by grabbing him while he cried sitting next to the bullet ridden bodies of his dead parents and fleeing the building in a swift move.

Sandra's pictures of holding the little boy close to her chest after escaping from the place touched the hearts of millions of people all over the world. She was later honoured with honourary citizenship by the Israeli government and now lives in Jerusalem. The ceremony began with observance of one-minute silence in honour of the victims.

India's Ambassador to Israel, Pavan Kapoor, speaking at the event stressed that the worst terrorist attack on the Indian soil "should motivate the world to unite against terrorism and defeat the ideology of hatred".

Kapoor pointed out that the planners and facilitators of the attack in Pakistan have not yet been brought to justice and, in this context, welcomed the statement of the US Secretary of State, Mike Pompeo. He expressed hope that other countries would follow the US lead and call upon Pakistan to uphold its obligations to implement sanctions against the terrorists responsible for this atrocity, including the members of Lashkar-e-Taeba and its affiliates.