Erdogan on Saturday led a large-scale celebration to commemorate the 946th anniversary of the 1071 Battle of Malazgirt. 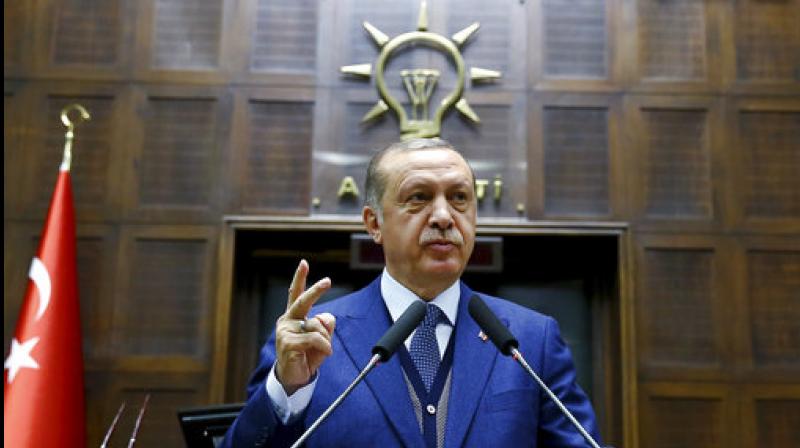 Erdogan has in recent years sought to put greater emphasis not just on the history of the Ottoman dynasty who conquered Constantinople in 1453 but of Turkic tribes in pre-Ottoman history. (Photo: File)

Ankara: Turkish President Recep Tayyip Erdogan on Saturday compared the defeat of last year's attempted coup against his rule to key events in the country's history, including a 1071 triumph by Turkic tribes over the Byzantines in Anatolia.

Erdogan has in recent years sought to put greater emphasis not just on the history of the Ottoman dynasty who conquered Constantinople in 1453 but of Turkic tribes in pre-Ottoman history.

Coinciding with a major protest event by the main opposition party at the western of the country, Erdogan on Saturday led a large-scale celebration to commemorate the 946th anniversary of the 1071 Battle of Malazgirt.

It was here that pre-Ottoman tribes led by Sultan Alp Arslan defeated the Byzantines and captured their Emperor Romanos IV Diogenes in a victory seen as opening up Anatolia to Turkic peoples.

Mustafa Kemal Ataturk was a key Ottoman commander in the Battle of Gallipoli in 1915, where Ottoman forces resisted an invasion by Allied powers, and went on to found the modern Republic in 1923.

"The game is the same, the aim the same. Only the script, the extras are different," Erdogan said. Throughout his speech, Erdogan was surrounded by men dressed in period costume as Seljuk fighters holding spears, wearing chain mail and boasting impressive handlebar moustaches.

Erdogan described organisations outlawed by Turkey as terror groups such as the Kurdistan Workers' Party (PKK) and the Syrian Kurdish Peoples' Protection Units (YPG) and its Democratic Union Party (PYD) political wing and "pawns" in an ongoing game.

Erdogan did not name any foreign country specifically but has strongly opposed the United States' close alliance with YPG fighters in the battle against jihadists in Syria. "FETO is a pawn. PKK, YPG, PYD, they are a pawn. Daesh (the Islamic State extremist group) is a pawn," Erdogan thundered.

"They are each a means used by powers that have their eye on our motherland," Erdogan added, vowing that the 1071 battle's August 26 anniversary would now be celebrated annually as a major national event.