The attack by 10 heavily-armed LeT terrorists killed 166 people and injured more than 300. 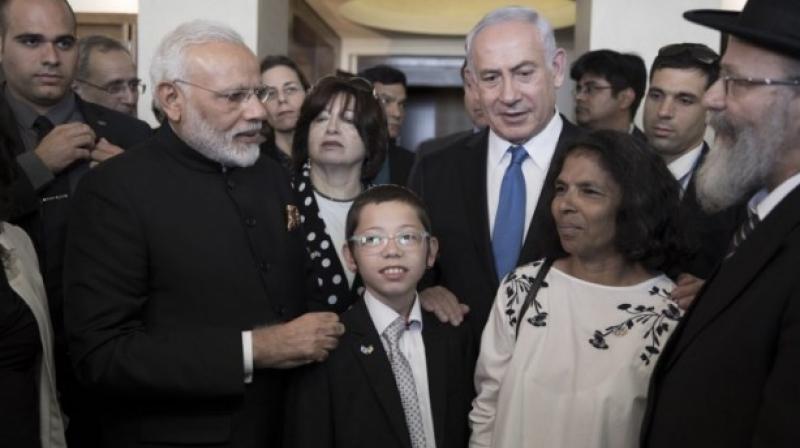 Moshe's parents, Rabbi Gavriel and Rivka Holtzberg, were killed along with six others at Chabad House. (Photo: AFP)

Jerusalem: Overwhelmed with emotion, Rabbi Shimon Rosenberg tried to avoid sharing his feelings. He had spent the past week remembering his loved ones who were killed by Pakistan-based LeT terrorists in a brutal attack in Mumbai nine years ago.

Rosenberg is the grandfather of Moshe Holtzberg, who was a two-year-old toddler when the 26/11 attacks happened and he lost his parents, Gavriel and Rivka. Little Moshe survived the terror onslaught because of his brave Indian nanny Sandra Samuels.

The attack by 10 heavily-armed LeT terrorists killed 166 people and injured more than 300. The terrorists launched co-ordinated shooting and bombing attacks at several landmarks in Mumbai, including the Chabad House at Nariman point.

Samuels, who now lives in Israel and was felicitated with an honorary citizenship by the Israeli government, escaped the brutality at Chabad House with baby Moshe.

She later moved to Israel to help in bringing up the boy.

"It was a moment that shook us all completely, and of course also the Indians. This is a week when we try to keep to ourselves," Rosenberg said.

"We offered our prayers at the cemetery in Mt. Olives in Jerusalem on Sunday. Because for us that was the ninth anniversary as per the Jewish calendar. We paid our respects to the departed souls in Afula. It was a quiet and personal affair, limited to the family only," he said.

Rosenberg appeared aware of the responsibility he and his wife Yehudit share, in bringing up Moshe, after the attack devastated their family. He said the family was determined to return to Mumbai to celebrate bar mitzvah for Moshe, now 11.

Bar mitzvah is a ceremony performed for Jewish boys at the age of 13. Some Israeli scholars compare it with upnayana, or the thread ceremony.

"Moshe celebrated his 11th birthday this week as per the Hebrew calendar and we talked about the plans for bar mitzvah in Mumbai. We want him to see where his parents lived and worked. He feels a strong connection with Mumbai," said the grandfather.

In August, India issued 10-year multiple-entry visas to Moshe and his grandparents to ease their travel to the country. Prime Minister Narendra Modi, during his maiden visit to Israel in July, had promised the family about the visas.

In an emotional meeting with Modi on July 5 in Jerusalem, Moshe had expressed his wish to be able to visit Mumbai.

"I hope I will be able to visit Mumbai, and when I get older, live there. I will be the director of our Chabad House," he had told Modi, who embraced the young boy on seeing him.

"With God's help, this is my answer," the little boy had said, reading from a prepared script, and concluded, "I love you and your people in India".

It was an emotional moment to meet young Moshe, his maternal & paternal grandparents and Ms Sandra Solomon, his nanny. pic.twitter.com/jI93JBSDp1

Modi had responded,"Come and stay in India and Mumbai. You are most welcome. You and your all family members will get long-term visas. So you can come anytime and go anywhere".

Israeli Prime Minister Benjamin Netanyahu promptly asked Moshe to accompany him when he travels to India in 2018.

Moshe and his grandparents are expected to join Netanyahu during his four-day visit to India, likely from January 14.

"We have received such a communication and are awaiting confirmation," Rosenberg said.

Moshe's parents, Rabbi Gavriel and Rivka Holtzberg, were killed along with six others at Chabad House. Moshe was saved in a daring act by his nanny, who, without caring for her safety, rushed inside the Chabad House on hearing him cry.

The 26/11 attacks were one of the bloodiest in the history of India and lasted for three days.

Ajmal Kasab, the lone terrorist captured alive was hanged after trial. The nine other terrorists were shot dead during the attacks.

The LeT founder and chief of Jamaat-Ud-Dawa, Hafiz Saeed, is said to be the mastermind of the attacks. Saeed carries an American bounty of USD 10 million on his head for terror activities. He was freed by Pakistan on Friday, just ahead of the anniversary of the attacks, after several months in "house arrest".