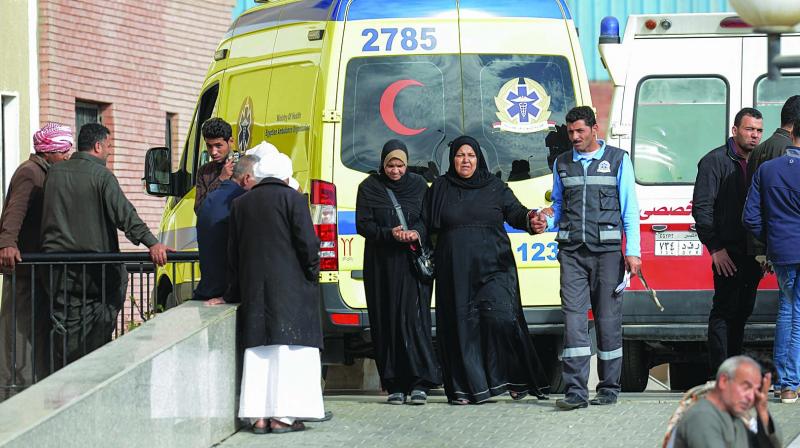 Relatives of victims of the attack outside the Suez Canal University hospital in the Ismailia, Egypt. (Photo: AFP)

Cairo: The Egyptian Air Force on Saturday gunned down several militants and destroyed their vehicles, hours after over 305 worshippers were killed in a terrorist attack at a mosque in the country’s restive North Sinai region.

Army spokesperson Tamer el-Refai said in a statement that the air forces launched retaliatory attacks on terror hideouts in the surrounding area of North Sinai, killing militants and destroying vehicles used in the deadly attack.

He said arms and ammunition depots of the militants were also targeted.

Gunmen who attacked a mosque on Friday in Egypt’s North Sinai brandished an Islamic State flag as they opened fire through doorways and windows, killing more than 300 worshippers, including two dozen children, officials said on Saturday.

“The worshippers were taken by surprise by these elements,” the prosecutor said in a statement. “They numbered between 25 and 30, carrying the Daesh flag and took up positions in front of the mosque door and its 12 windows with automatic rifles.”

The gunmen, some wearing masks and military-style uniforms, had arrived in jeeps, surrounded the mosque and opened fire inside, sending panicked worshippers scrambling over each other to escape the carnage.

In a statement later, he pledged to respond with “brutal force” against militants. He had said that the “vile and treacherous” activity would not pass without a decisive punishment. Striking a mosque would be a shift in tactics for the Sinai militants.