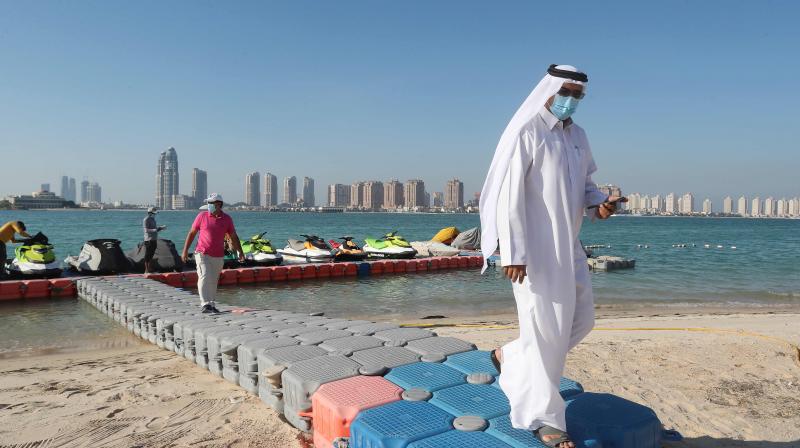 Doha: Qatar has the world's highest per-capita coronavirus infection rate but one of the lowest death rates, due to extensive testing, a young population and lavish healthcare spending.

Here is an explanation of why Qatar, home to 2.75 million people, has reported so many positive cases and how it has tackled the public health emergency.

Why does Qatar have the highest per-capita infection rate?

Qatar's health authorities are adamant that their high per-capita infection rate is down to one factor above all: testing.

Almost 600,000 people have been tested for the novel coronavirus, over a fifth of the population.

"Because of our low threshold for testing, we have identified many more asymptomatic and mild cases of the virus than other countries," the chair of the National Strategic Group on COVID-19 Abdullatif al-Khal told AFP.

But beyond that, Qatar has faced local outbreaks that spread fast because of its reliance on foreign labourers living in cramped, unsanitary conditions, as it transforms the country ahead of the 2022 World Cup.

Antoine Flahault, co-director of the Swiss School of Public Health, told AFP that other countries with large populations of migrant workers, including Singapore and other Gulf nations, faced similar spikes in cases.

"Singapore had a surge in cases last April which initiated in dormitories of migrant workers with poor levels of sanitation (and) health insurance," he said.

Qatari capital Doha's outlying Industrial Area, the scene of the country's first surge of reported cases, was sealed by security forces and flooded with public health teams to contain the outbreak.

What was the testing strategy?

Unlike some Gulf countries which have opted for dragnet testing, Doha has zeroed in on groups more vulnerable to infection, including migrant labourers and Qataris returning from overseas.

More than one in five residents have now been tested, and at the height of the pandemic, more than one in four of those tests were positive, according to a laboratory source.

Luxembourg leads the world testing rankings with 755 per 1,000 people since the pandemic began; Qatar ranks ninth globally with 203.

Why is the fatality rate so low?

Gas-rich Qatar's heavy investment in its health system in recent years, coupled with its unusually young population of migrant workers, helped keep its fatality rate among the lowest in the world, authorities and experts say.

Just 194 people have died -- only 0.17 percent of those infected, according to official statistics.

"The reason being they probably have (one of) the best health systems -- they are well-equipped and they were well prepared," Abdinasir Abubakar, from the World Health Organization's regional office, told AFP.

Qatar's critical care infrastructure also proved resilient, in contrast to some countries where the death rate has been much higher.

The Gulf state's intensive care units reached only 76 percent capacity at the peak of the outbreak, the health ministry said.

"A strong history of health sector investment (ensured) everybody who needed hospital care was able to receive it free of charge," Khal said.

Is there risk of a second spike?

As of August 20, Qatar's "R" rate, the number of people each infected person goes on to infect, had dropped to "well below 1 and remains stable," said Khal.

The country has posted new daily infection rates hovering in the 200-range in the past week -- but those are far lower than the 2,355 cases reported on May 30.

"Qatar has partially lifted some restrictions and we could expect some resurgence," said the WHO's Abubakar.

"But we expect they will maintain some measures and intensify testing and tracing, and management of cases."

Social distancing rules are enforced in workplaces and public areas, masks are required in shops and when outdoors for reasons other than exercise.

Wary of another wave of infections, authorities have take extraordinary measures, even including the public naming of Qataris breaching self-quarantine -- something unprecedented in the traditional society.