Egypt has witnessed a series of terror attacks this year claiming scores of lives. 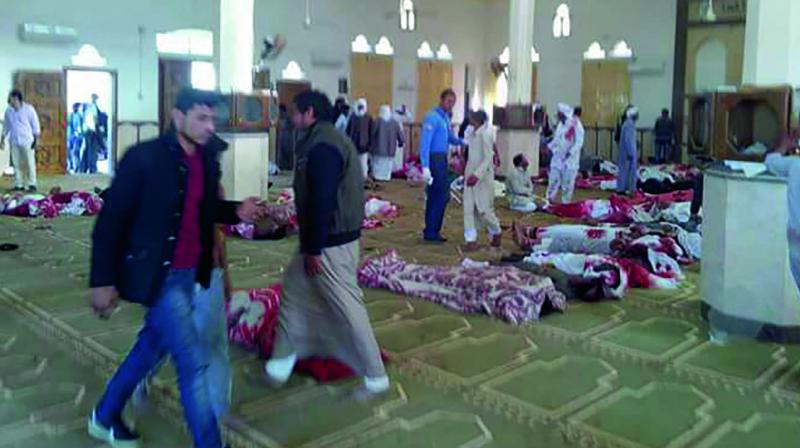 Egyptians walk past bodies following an attack at the Rawda mosque in Egypt. (Photo: AFP)

Cairo: An angry Egyptian President Abdel Fattah al-Sisi pledged to respond with “brutal force” against militants who massacred at least 235 people at a mosque during weekly prayers on Friday.

“The army and police will avenge our martyrs and return security and stability with force in the coming short period,” he also said in a televised speech.

Militants struck a mosque during Friday prayers in Egypt’s restive North Sinai region, in the deadliest terror attack in the country.

The militants launched a targeted bomb and gun attack on the al-Rowda mosque in Al-Arish city during the Friday prayers, the state-run MENA news agency reported.

After the bomb ripped through the mosque, the gunmen on four off-road  vehicles opened fire on the worshippers who tried to escape from the site after the explosion, it said.

About 50 ambulances were rushed to the attack site to shift the injured to hospitals. No group has claimed responsibility for the attack so far.

The Egypt government has announced three days of mourning, even as President Abdel Fattah el-Sisi chaired an emergency meeting with officials to review security situation after the deadly attack.

The attacks targeting police and military increased after the ouster of Islamist ex-president Mohamed Morsi in 2013 by military following massive protests against his rule. Over 700 security personnel have been reported killed since then.

The military has launched security campaigns in the area, arrested suspects and demolished houses that belonged to terrorists, including those facilitating tunnels leading to the Gaza Strip.

Egypt has witnessed a series of terror attacks this year claiming scores of lives.