Palestinians protest, strike over US peace plan in Bahrain

But the Palestinians have boycott the event, accusing President Donald Trump's administration of pro-Israel bias. 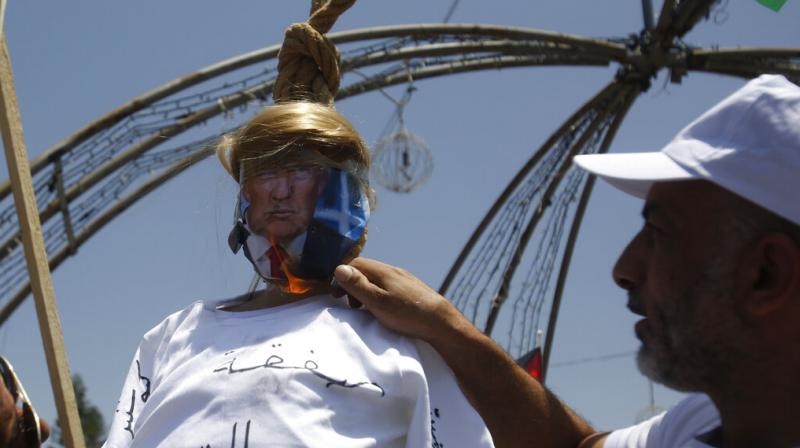 The Palestinians again rejected the proposals Tuesday, accusing the US and Israel of trying to bully them and quash their desire for independence. (Photo: AP)

Gaza: Thousands of Palestinians demonstrated on Tuesday throughout the occupied West Bank and the Gaza Strip against the launch of the US administration's Middle East peace plan.

Around 3,000 people protested in Nablus in the northern West Bank, with dozens attending demonstrations in Ramallah and Hebron, AFP journalist said. The US is set to roll out economic proposals at a conference in Bahrain later Tuesday aimed at paving the way towards a peace process between the Israelis and the Palestinians.

But the Palestinians are boycotting the event, accusing President Donald Trump's administration of pro-Israel bias. Rallying calls from the Palestine Liberation Organisation (PLO) and other groups raised fears of widespread clashes, but they did not materialise.

While the Bahrain conference is set to cover the economic aspects of Trump's long-delayed plan, its more contentious political proposals are likely to be delayed until after the Israeli elections in September. Led by Trump's son-in-law and adviser Jared Kushner, the "Peace to Prosperity" framework dangles the prospect of USD 50 billion of investment in the Palestinian territories and neighbouring Arab countries over 10 years.

The Palestinians again rejected the proposals Tuesday, accusing the US and Israel of trying to bully them and quash their desire for independence. "Such inciting campaigns aim at making the people and leadership of Palestine accept the dictations, threats, and tyranny of both the US and Israel - and they are doomed to fail," Saeb Erekat, secretary general of the PLO, said in a statement. "Our position is clear: we will not compromise on the necessity of a permanent, comprehensive, and lasting political solution."