'Sisi has ratified the maritime demarcation agreement between the Arab Republic of Egypt and the Kingdom of Saudi Arabia', Cabinet said. 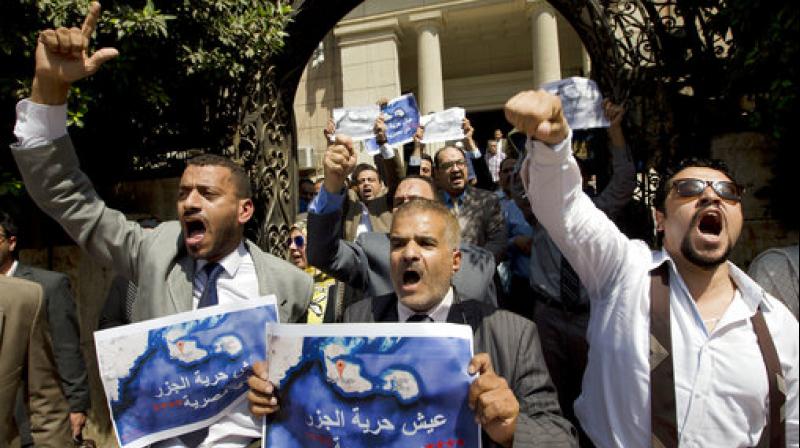 Dozens of lawyers shout slogans during a protest against the accord to hand over control of two strategic Red Sea islands, Tiran and Sanafir, to Saudi Arabia in front of the lawyers syndicate in Cairo. (Photo: AP)

The Egypt President's ratification comes after the Egyptian Parliament approved, in a general vote, the controversial agreement to hand over the two Red Sea islands to Saudi Arabia Red Sea islands of Tiran and Sanafir to the Saudis, the Xinhua news agency reported.

An Egyptian judge had quashed a government decision to hand control of two Red Sea islands to Saudi Arabia. Judge Yehia al-Dakroury's ruling that Egyptian sovereignty over the island Cairo emphasised that the agreement between Egypt and Saudi Arabia regarding the maritime border also affects Sudan, given its connection with the two regions of Halayeb and Shalateen and the surrounding shores.

"President Abdel Fattah al-Sisi has ratified the maritime demarcation agreement between the Arab Republic of Egypt and the Kingdom of Saudi Arabia," the cabinet said in a statement.

The Red Sea islands accord has become politically sensitive for Sisi as he considers Saudi Arabia as a key ally, but street protests broke out over the agreement last year among Egyptians angered over the concession.

Egypt's Parliament last week backed the deal, but it has also become the subject of a legal tussle between different courts over jurisdiction.

The maritime demarcation deal was signed last year during a rare visit of Saudi King Salman bin Abdulaziz Al Saud to Egypt and the majority of members voted for it.

The deal has gone through a judicial debate in Egypt. While previous administrative court rulings invalidated the deal, a later verdict from the court of urgent matters halted the invalidation ruling.