Pan-Islamic body to meet over clash in Jerusalem

'The issue of the Al-Aqsa mosque is a red line', the Jeddah-based OIC said in a statement after a meeting in the Saudi Red Sea city. 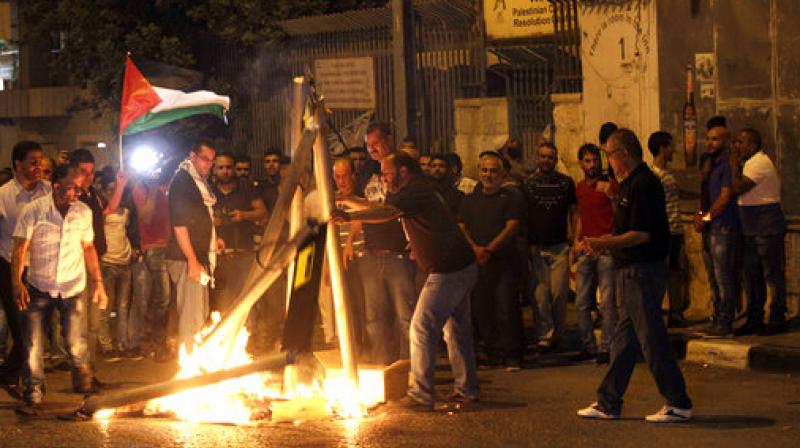 Palestinians burn mock metal detectors during a demonstration in Bethlehem. Israel's minister of public security said Sunday that metal detectors set at the entrance to a major Jerusalem shrine that angered Palestinians could be removed if police have another way of ensuring security there. (Photo: AP)

Jeddah: The Organisation of Islamic Cooperation will meet in Istanbul next week for talks on the crisis around Jerusalem's Al-Aqsa mosque, after a weekend of violence left eight people dead.

The 57-member pan-Islamic organisation will hold a ministerial meeting on Tuesday in Turkey, which currently holds the OIC presidency, a statement said on Monday.

Israeli authorities installed metal detectors at entrances to the highly sensitive east Jerusalem site, which includes Al-Aqsa mosque and the Dome of Rock, following an attack on July 14 that left two policemen dead.

"The issue of the Al-Aqsa mosque is a red line," the Jeddah-based OIC said in a statement after a meeting in the Saudi Red Sea city.

"Attacking the al-Aqsa mosque in any way and under whatever pretext will have serious consequence and will lead to instability in the region," it added.

Palestinians view the security measures as a move by Israel to assert further control over the site. They have refused to enter the compound in protest and have prayed in the streets outside.

Israeli authorities say the metal detectors are needed because the July 14 attackers smuggled guns into the site and emerged from it to shoot the officers.

Clashes have broken out during protests over the measures, leaving five Palestinians dead. Three Israelis were killed when a Palestinian snuck into a house in a West Bank settlement and stabbed them.

The site in east Jerusalem is considered the third holiest site in Islam and is the most sacred for Jews.