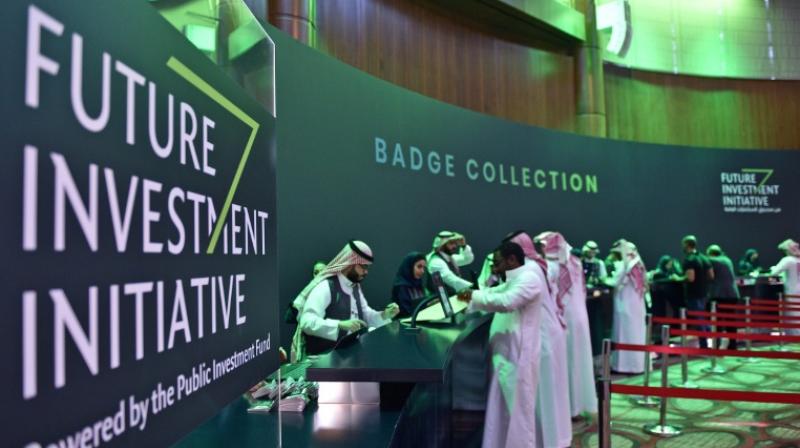 Riyadh: Saudi Arabia opened an investment conference on Tuesday despite a wave of cancellations from policymakers and business titans over the murder of journalist and government critic Jamal Khashoggi.

The three-day Future Investment Initiative (FII) was meant to project the historically insular petro-state as a lucrative business destination and set the stage for new ventures and multi-billion dollar contracts.

But the summit, nicknamed "Davos in the desert", has been overshadowed by growing global outrage over the murder of Khashoggi inside the kingdom's consulate in Istanbul on October 2, with a string of leading international investors pulling out over the case.

Turkish President Recep Tayyip Erdogan has vowed to reveal what he has called the "naked truth" about the Khashoggi murder -- a killing Ankara has said was "savagely planned".

But a growing list of investors and international figureheads have declined to show up in Riyadh in apparent protest against the Khashoggi killing.

Ministers from Britain and France as well as the United States, which have huge defence deals at stake with Saudi Arabia, have stayed away.

Pakistan's Khan attended however as his government continues to seek funding to plug its deteriorating finances.

A wider Western boycott of the conference suggests rising political risks in Saudi Arabia that could hit foreign direct investment, which already plunged to a 14-year low last year, according to a UN body.

"Despite talk of reform, FDI inflows into Saudi have stayed low and the (Khashoggi) scandal will only increase investor uncertainty," said research firm Capital Economics.

And in a fresh setback, the forum's website went down on Monday after an apparent cyberattack. There was no immediate claim of responsibility.

It was back up with reduced content when the conference opened.

This year's conference contrasts with last year's inaugural FII -- a star-studded event at Riyadh's glittering Ritz-Carlton hotel, where Crown Prince Mohammed bin Salman was lionised as a visionary as he wowed investors with talking robots and plans for a futuristic mega-city.

But many Western firms have too much at stake to abandon the Arab world's biggest economy, and some are preparing to send lower-level executives to the summit.

Senior investment bankers from HSBC and Credit Suisse are planning to attend the conference even though their chief executives have cancelled their attendance, Bloomberg News reported.

Companies from China and Russia have also shown little interest in withdrawing from the event, an organiser said.

"The high profile withdrawal of so many American CEOs from the conference certainly presents opportunities for Asian and Russian companies to make a splash," Ellen Wald, author of the book "Saudi Inc.", told AFP.

"But there is no indication, so far, that companies are shying away from business opportunities in the kingdom."

After more than two weeks of vehement denials, Saudi Arabia has now admitted Khashoggi was killed in the consulate.

In the past weeks, Turkish media and officials speaking to international media have said audio recordings prove Khashoggi was tortured before being decapitated although no concrete evidence of their existence has emerged.

Saudi Foreign Minister Adel al-Jubeir said Tuesday the killing of a critic must "never happen again", as he pledged a "thorough and complete" investigation into the journalist's murder.

Khashoggi's killing fits a pattern of a recent crackdown on dissent in the kingdom, with Prince Mohammed, King Salman's son and the de facto ruler, arresting clerics, business high-fliers and women activists.

Further stoking investor anxiety, the kingdom is embroiled in an expensive war in Yemen and is leading an embargo against neighbouring Qatar.

Riyadh has also engaged in diplomatic disputes with Germany and Canada that have threatened business ties.