In bid to distance Iran, Saudi strengthen ties with Iraq

Sadr's rare visit to Saudi Arabia came at the invitation of Riyadh, which played up his meeting with Crown Prince Mohammed bin Salman. 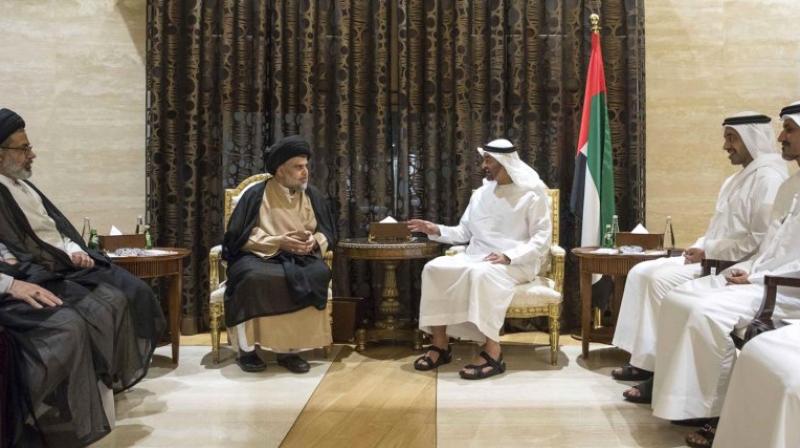 In the wake of former dictator Saddam Hussein's August 1990 invasion of Kuwait, Riyadh severed relations with Baghdad and closed its border posts with its northern neighbour.

Ties have remained strained even after Saddam's ouster in the 2003 US-led invasion of Iraq, since when successive Shiite-dominated governments in Baghdad have stayed close to Tehran.

But Sadr's rare visit to Saudi Arabia came at the invitation of Riyadh, which played up his meeting with Crown Prince Mohammed bin Salman. Two weeks later, Sadr followed up by holding talks in Abu Dhabi with its Crown Prince Mohammed bin Zayed Al-Nahyan, strongman of the United Arab Emirates (UAE) and close ally of his counterpart in the kingdom of Saudi Arabia (KSA).

"Hosting Sadr in Riyadh and Abu Dhabi shows regional rivals and particularly Iran that KSA/UAE are capable of tapping into and influencing intra-Shia politics in Iraq," said Fanar Haddad, a research fellow at the Washington-based Middle East Institute.

For the Gulf monarchies, "Sadr would be a prize catch authentically Shia-Iraqi, distrustful if not disdainful of Iran and with a genuinely organic and loyal grassroots following."

The pro-Western Arab states of the Gulf aim to show that Iran no longer holds a monopoly on influencing policy in Baghdad, according to Iraqi political scientist Hashem al-Hashemi.

Tehran "prided itself on pulling all the strings among the Shiites (of Iraq) but it seems that several strings are now beyond its grasp, like that of the Sadrists", Hashemi said.

In June, Iraqi Prime Minister Haider al-Abadi, also a Shiite, held meetings in Saudi Arabia, four months after a visit to Baghdad by Saudi Foreign Minister Adel al-Jubeir, a first of its kind since 2003.

For Michael Knights, a researcher at the Washington Institute, such interaction with Riyadh could come at a price. "Tehran will view the Saudi Arabian engagement by Abadi and Sadr as another reason that Abadi must be displaced as premier in the 2018 elections," said Knights. "And Iran will work hard behind the scenes with money, media and weapons to make that happen."

But at the same time, Haddad warned that Riyadh and Abu Dhabi should not count too heavily on Sadr to restore their influence in Baghdad at the expense of Tehran. "They should moderate their expectations as to how much he will be willing to deliver," he cautioned.

Tehran has played a major political, economic and military role in Baghdad since the end of Saddam's rule, during which Shiites were barred from powerful posts and Shiite-majority Iraq fought a 1980-1988 war against Shiite but non-Arab Iran.

According to the Carnegie Middle East Center, Iranian exports, not including fuel, tripled between 2008 and 2015 to reach $6.2 billion. Apart from military advisers on the ground in Iraq, Iran also sponsors several armed groups, in particular the paramilitary Hashed al-Shaabi units that are playing a key role in fighting the Islamic State (ISIS) jihadist group.

On his return from Saudi Arabia, Sadr renewed calls for the dismantling of armed groups, a stance which "makes him particularly attractive to KSA/UAE", said Haddad.

But the firebrand cleric, whose own armed supporters fought fierce battles against US and government forces in the wake of the invasion, has steered clear of openly condemning Hashed al-Shaabi, which was set up at the request of the Shiite religious hierarchy in post-Saddam Iraq.

Furthermore, Haddad stressed, a warming in ties between Riyadh and Sadr cannot be compared to close relations between two states. "We're still a long way from Iraqi-Saudi relations coming anywhere near the depth or complexity of Iraqi-Iranian ties," he said.

But in a first decisive step, Riyadh and Baghdad have announced plans to reopen the Arar desert crossing, their main border post and a potential alternative to Iraq's posts with Iran that are used for most of its imports.

The border has been shut for most of the past three decades to all travellers except Iraqi Muslim pilgrims heading to and from Mecca in western Saudi Arabia.

The announcement was made during a joint inspection of the Arar post by Iraqi and Saudi officials as well as Brett McGurk, the senior US envoy to the international coalition fighting ISIS.