Nineteen children and 12 women were among those killed in the raids, which hit several neighbourhoods in the northern city. 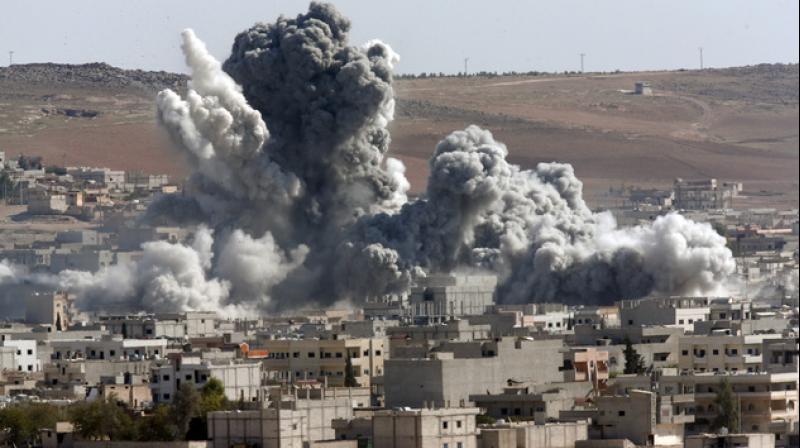 The US-led coalition, which operates in both Syria and neighbouring Iraq, says it takes all possible measures to avoid civilian casualties. (Photo: Representational/File)

Beirut: At least 42 civilians were killed Monday in a barrage of US-led air strikes on Islamic State group territory in the Syrian city of Raqa, a monitor said.

Nineteen children and 12 women were among those killed in the raids, which hit several neighbourhoods in the northern city, the Syrian Observatory for Human Rights told AFP on Tuesday.

The toll marked the second consecutive day of ferocious bombardment on Raqa, more than half of which has been captured by the US-backed Syrian Democratic Forces battling ISIS.

The latest figures for Monday's raids take to 167 the number of civilians killed in coalition strikes since August 14, after the Observatory said at least 27 were killed on Sunday.

"The tolls are high because the air strikes are hitting neighbourhoods in the city centre that are densely packed with civilians," said Observatory director Rami Abdel Rahman.

"There are buildings full of civilians that are trying to get away from the front lines. "Coalition air strikes are targeting any building where any kind of Daesh movements are being detected," he told AFP, using an Arabic acronym for ISIS.

The United Nations estimates there are up to 25,000 civilians trapped inside the city, with food and fuel supplies short and prohibitively expensive.

The UN's humanitarian pointman for Syria, Jan Egeland, has said ISIS-held territory in Raqa city is now "the worst place" in the war-torn country.

More than 330,000 people have been killed in Syria's conflict, which began with anti-government protests in 2011 but has since mushroomed into all-out war drawing in world powers.

The US-led coalition, which operates in both Syria and neighbouring Iraq, says it takes all possible measures to avoid civilian casualties.

In August, it acknowledged the deaths of 624 civilians in its strikes in Syria and Iraq since 2014, but rights groups say the number is much higher.