This year, 60,000 vaccinated citizens or residents of Saudi Arabia have been allowed to perform the Hajj 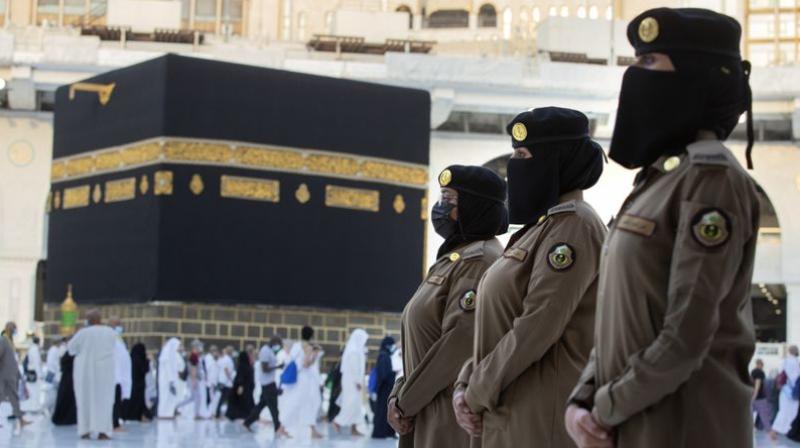 Saudi police women, who are recently deployed to the service, stand alert in front of the Kaaba, the cubic building at the Grand Mosque, during the annual hajj pilgrimage, in Saudi Arabia's holy city of Mecca. (AP)

Mecca: In a significant stride towards women empowerment, dozens of female soldiers have become a part of the security services that monitor pilgrims in Mecca and Medina, the birthplaces of Islam.

For the first time, Saudi female soldiers are standing guard in Mecca as thousands of Muslim pilgrims take part in this year's hajj, Deutsche Welle reported.

Women dressed in military khaki uniforms were seen monitoring the security situation in the Grand Mosque in Mecca. Along with khaki, they were sporting a hip-length jacket, loose trousers, and a black beret over a veil covering their hair.

People across Twitter hailed the feat. Scores of users called it a key step towards women empowerment.

"First time in the history of Makkah a female Saudi Guard performing duty during #Hajj #WomenEmpowerment," a Twitter user wrote.

"Long overdue but never too late," another Twitterati wrote.

While adhering to COVID-19 protocols, thousands of vaccinated Muslim pilgrims gathered at Mecca to perform Hajj.

The Hajj, which is one of the five pillars of Islam, will conclude with the Eid al-Adha celebrations.

According to Al Jazeera, 10,000 vaccinated Muslim pilgrims circled Islam's holiest site in Mecca on Sunday but remained socially distanced and wore masks as the coronavirus takes its toll on the Hajj for a second year running.

Previously drawing some 2.5 million Muslims from all walks of life from across the globe, the Hajj pilgrimage is now almost unrecognisable in scale.

This year, 60,000 vaccinated citizens or residents of Saudi Arabia have been allowed to perform the Hajj due to continued concerns around the spread of the coronavirus.

It is a far greater figure than last year's largely symbolic Hajj that saw fewer than 1,000 people from within the kingdom taking part.