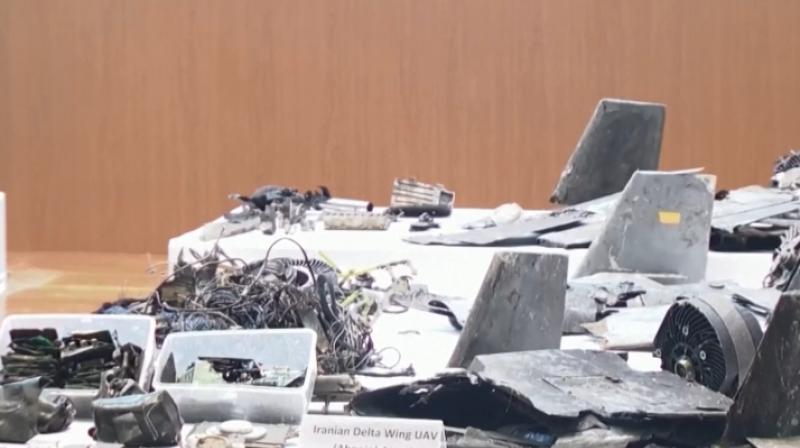 Saudi Arabia on Wednesday displayed remnants of what it described as Iranian drones and cruise missiles used in an attack on Saudi oil facilities, saying they were "undeniable" evidence of Iranian aggression. (Photo: screengrab)

Riyadh: Saudi Arabia on Wednesday displayed remnants of what it described as Iranian drones and cruise missiles used in an attack on Saudi oil facilities, saying they were "undeniable" evidence of Iranian aggression.

"The attack was launched from the north and unquestionably sponsored by Iran," he told a news conference. "The evidence ... that you have seen in front of you, makes this undeniable."

Saudi Arabia has claimed Iranian cruise missiles and drones were used to attack the kingdom's oil industry, showing journalists the remains of the weapons but stopping short of directly accusing Tehran of launching the assault. Iran denies being...

Authorities were still working to determine the exact launch point, Malki said, repeatedly declining to answer reporters questions about whether Iran actually carried out the attack.

Iran has denied any involvement in the assault that initially halved Saudi Arabia's oil production. An adviser to Iran's president tweeted that the press conference proved Saudi Arabia "knows nothing".

Yemen's Iran-aligned Houthi movement, which has been battling a Saudi-led military coalition, has claimed responsibility for the strikes.

On Wednesday, the group gave details of the type of drones it said were used in the Sept. 14 attack and warned that the United Arab Emirates was also in its sights.

Malki reiterated that the attack could not have come from Yemen, south of Saudi Arabia, and that the Houthis were "covering up" for Iran.

"The precision impact of the cruise missile indicate advanced capability beyond Iran proxy capacity," he said. "The targeting direction of the site indicate north to south direction of travel."

Eighteen drones and three missiles were launched at Abqaiq, home to the world's largest oil processing facility, but the missiles "fell short", Malki said. He said four missiles targeted Khurais, adding that the Ya Ali missiles have a range of 700 km and have been used by Iran's Revolutionary Guards.

Houthi military spokesman Yahya Saria reiterated that the movement had carried out the strike, saying it possessed new drones, powered by normal and jet engines, that could reach targets deep inside the "enemy".

The group had launched "Samad 3", "Qassef 3", jet-powered and other drones, including some carrying bombs, at the Saudi oil plants from three sites, he said in a televised speech.

"Today and for the first time we announce that we have dozens of targets within our range in the UAE, some are in Abu Dhabi and can be attacked at any time," he said.

The Western-backed, Sunni Muslim coalition intervened in Yemen in March 2015 against the Houthis after they ousted the internationally recognised government from power in the capital Sanaa in late 2014.

The UAE in June scaled down its military presence in Yemen as Western allies pressed for an end to the ruinous war and as rising tensions with Iran raised fears of a war in the Gulf.

The Yemen conflict, seen as proxy war between Saudi Arabia and Iran, has killed tens of thousands and pushed millions to the brink of famine in the poorest Arabian Peninsula nation.